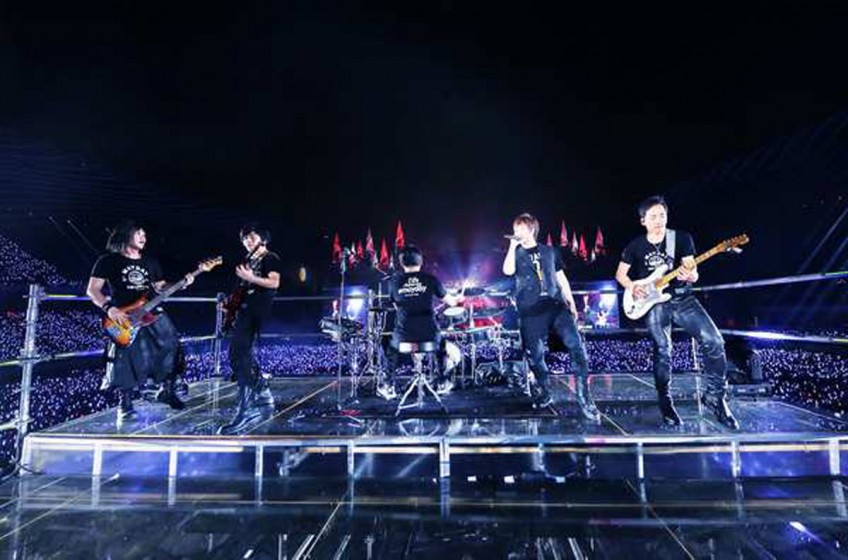 Music fans, Taipei citizens and city government officials alike are getting ready after Mayday (五月天) , one of the Chinese-speaking world's biggest bands, made the surprise announcement that they would hold a free concert at a city park next week.

On the last stop of their most recent tour Tuesday night, the band announced they would put on a free performance on March 29 at Taipei's Daan Forest Park to mark the group's 20th anniversary.

The gig marks a return to the venue where the band played their first major concert in 1997.

The news of the concert brought excitement on the blogosphere, but also concerns from local officials.

The Taipei Metro Company has already stated that more trains to Daan Forest Park MRT Station would be scheduled to meet the expected surge in demand.

Parks and Street Lights Office Director Yang Shu-hui  (楊淑惠) of Taipei City's Public Works Department said she was quite worried about the amount of people that would turn out for the concert.

Including the 1,500 seats available in front of the park's amphitheater, the performance area of the park could accommodate around 5,000 people, Yang said.

This may be far less than sufficient for the turnout, Yang said, but she added that the band had been approved to perform at the space after properly filling out all the required applications.

A recent series of concerts in Kaohsiung by the band attracted over 200,000 ticket-buying fans.

Regarding the appearance of crowds looking for a good spot at the park days before the performance , Yang said that as the park was a public area, authorities had no reason to stop them - so long as they refrained from violent or indecent behaviour.

People had already started camping out in the park Wednesday night to secure a good spot, while others had left placeholders.

However, not all of those camping out are necessarily fans.

It was reported that some of those getting in early to claim a seat intended to sell off their hard-won turf - with one camper saying his asking price would be upwards of NT$35,000(S$1607).

Yang said that fans "could most likely jump" at next Wednesday's concert - a reference to the limits on rocking out imposed by Taipei Arena after complaints from nearby residents.

The regulation imposed at Taipei Arena had been necessary due to tremors caused by the vibrations induced by large crowds jumping on top of levels of underground parking lots.

Since there are no such constructions underneath the park area, concertgoers would not have to worry about causing complaints, Yang said.

Formed March 29, 1997, Mayday has won a slate of Golden Melody Awards, the Chinese-speaking world's equivalent of the Grammys.

They also performed in front of 100,000 people over two days at Beijing's "Bird's Nest" stadium.