The ugly public divorce between singer Wang Leehom and his estranged wife Lee Jinglei has led to at least one unpredictable outcome: Lee has emerged as a darling among Chinese netizens for her high-quality written Chinese.

Her words, nicknamed the “hammer of the thunder goddess”, have been praised as precise and powerful, especially when compared to her former partner Wang.

She was compared to Thor, the hammer-wielding god of thunder and lightning from Norse mythology, because a Chinese character in her name, “lei”, is pronounced the same way as “thunder” in Mandarin.

Lee was raised in Taiwan and educated in the US. While the details of her divorce attracted widespread sympathy, her excellent language skills made her eminently likeable. Her Instagram followers soared to nearly 880,000 over the past week, and her Weibo followers tripled to over 4.6 million during that period.

By contrast, Wang, a native Mandarin speaker who was educated in the West, has been mocked for his awkward expressions and typos in his responses to the allegations of serial infidelity and soliciting sex workers.

Under his four-page rebuttal against Lee’s accusations published on Monday night, the most popular comment read: “What is all this? Did Zheng Shuang teach you to write?”

Zheng is a famous actress who also fell from grace in 2021. She has been mocked for her perceived poor language when defending herself after being accused of tax evasion and abandoning her two children born to a surrogate mother in the US. 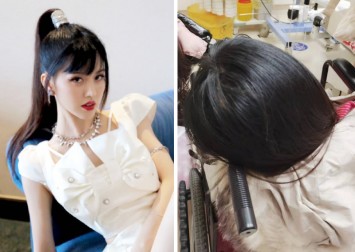 As for Lee, public social media accounts are teasing apart every sentence she writes and promoting it as “learn to write a good Chinese essay from Lee Jinglei”. The articles have been popular on WeChat.

Hou Hongbin, a Guangzhou-based feminist writer, said Lee’s strong writing enabled her to tell her own story by concisely describing the gender inequality faced by many housewives in the Chinese-speaking world.

“In terms of language skills, I would say she is better than some professional writers. She is also smart enough to know what are the important ideas to convey and what arguments would benefit her,” said Hou.

She said that while it’s important to acknowledge that the persuasive and empathy-evoking writing style contributed to Lee’s favourable public sentiment, she also became a darling because she represents modern concepts about the role of women in what has long been a patriarchal society.

On the flip side, Wang and his parents disappointed the public because they promoted outdated gender stereotypes.

Hou said that unfounded accusations, such as that Lee used a pregnancy to force Wang into marriage, reminded her of family dynamics in feudal China.

“It is feudalism that even mainlanders today try to avoid, let alone people well-educated in the West,” she said.