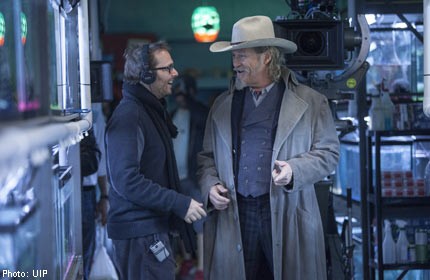 Death may be fatal but the afterlife is even more of a drag - if the ill-conceived and poorly-executed R.I.P.D. is any indication. This new film, about deceased cops in pursuit of equally dead bad guys in CGI-enhanced form, is Exhibit A in what can go wrong during a movie project's transition from potentially interesting story idea to final product (answer: almost everything).

This bloated, blatant Men In Black rip-off, directed by Robert Schwentke and based on a Dark Horse comic by Peter Lenkov, is practically dead on arrival. It doesn't bode well for an action-comedy when a succession of visual gags and one-liners during the opening scene fails to elicit anything more than a courtesy chuckle and a nasty sense of déjà vu - especially when it's not a sequel.

The paucity of original ideas in Hollywood these days is exemplified by this cliché-ridden buddy flick, which follows in the footsteps of countless movies before it but doesn't come close to emulating any of its predecessors. This is a lazy attempt at formula filmmaking and it shows, to the detriment of all involved.

Boston detective Nick Walker (Ryan Reynolds) has barely buried some ill-gotten loot in his backyard when he has an attack of conscience and informs partner Bobby Hayes (Kevin Bacon, playing yet another sleaze bag) that he no longer wants to be a dirty cop.

Bad idea, because pretty soon Nick is dead and assigned by Proctor (Mary-Louise Parker), who runs the Rest In Peace Department, to team up with Roy Pulsifer (Jeff Bridges) and round up the dead villains roaming Boston.

Roy is a 19th-century lawman who wears a cowboy hat and a General Custer look, complete with flowing blond locks and a Colonel Sanders goatee. More annoyingly, he directs an endless stream of mumbo-jumbo disguised as advice for his younger colleague which - if he weren't already dead, might drive Nick to shoot himself all over again.

Nick and Roy are already dead and so can't be killed again - a convenient detail which allows them to jump off tall buildings and be squished by heavy objects, only to bounce back in the line of duty, which involves preventing the planet from turning into monsters, inc.

A running gag in the film dictates that they appear as other people to living beings, so when Nick tries to communicate from the beyond with his wife Julia (Stephanie Szostak), she sees only an old Chinese guy (James Hong) in a crumpled hat.

That's a cute visual device that works for awhile but what jokes there are soon fade into the distance and it's a challenge to stay fully engaged. Ultimately, this film is a noisy cinematic dud for which the end cannot come too soon. Zombie flicks may be de rigueur this year but R.I.P.D. never had a pulse to begin with - mercifully, I see no possibility of an afterlife/sequel in its future.