Tan Kee Yun
The New Paper
Local rapper Shigga Shay (above) has released a youtube video of his latest multi-lingual rap, which is packed with Hokkien vocabulary like "limpeh", "za bor" and "bang pui".

SINGAPORE - Parents, don't be surprised if your teens start spouting the catchphrase "Limpeh" - a Hokkien term that translates to "my father" - more often than usual.

Less than a week since its release, the video has garnered nearly 150,000 views on YouTube.

Styled like a satirical spoof of Hong Kong's classic gangster flicks, it features Shigga Shay, co-rapper and Ah Boys To Men star Tosh Zhang and their merry gang of homies with a collective penchant for retro-inspired fashion (read: floral print shirts, white singlets and slicked back hair) strutting down alleyways with faux swagger and challenging their "enemies" to a fight.

Their garang (Malay for enthusiastic) facade soon gives way to over-the-top hilarity and that's when the video truly comes alive.

An almost-fist fight between grown men becomes a squealfest involving Shigga Shay, Zhang and guest star Wang Weiliang - who also acted in the local hit movie Ah Boys To Men - whipping out their plastic water guns. Boys will be boys. 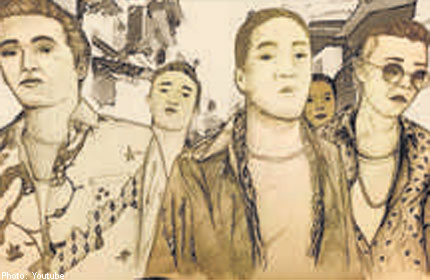 0:06: I'm digging the comic book tone at the start of the video. It reminds me of Hong Kong's Young And Dangerous movies of the 1990s. 1:09: You'd expect cigarettes and lighters at a dinner, as with all gangster flicks. But no, Shigga Shay fishes out his bubbleblowing toy and proceeds to blow bubbles in his mates' faces. 2:44: Chaos ensues when the "gangsters", instead of landing blows on each other, start pulling ears and pinching nipples.