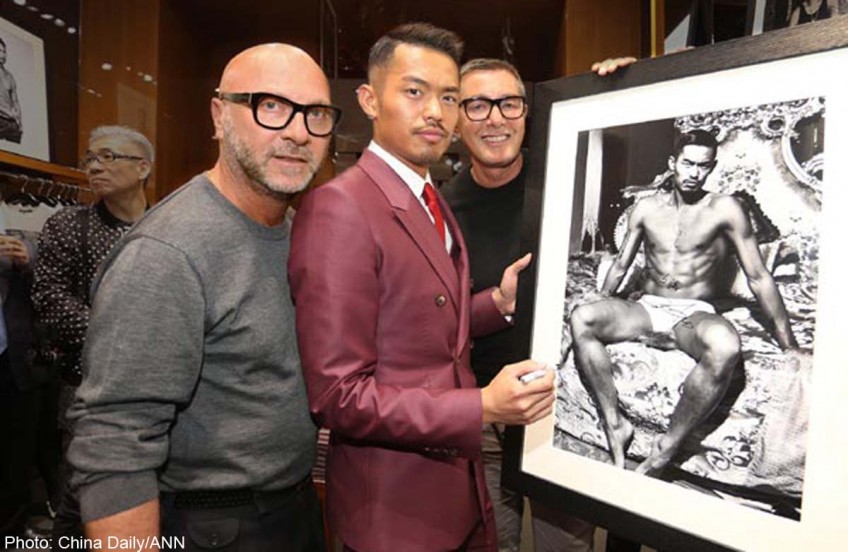 Lin Dan is best known as the invincible "Super Dan" on the badminton court, but he is also pretty fierce in a designer suit.

Last week in Shanghai, the two-time Olympic badminton gold medal winner published an album of photos of himself in collaboration with Italian design duo Domenico Dolce and Stefano Gabbana.

A-listers, supermodels including Naomi Campell, Du Juan and Carina Lau, socialites and top clients, came to celebrate the new book at an extravagant banquet in the Shanghai Exhibition Center. DJs and dancers flown in from the UK kept the party going late into the night.

Styled by Gabbana and photographed by Dolce, the book depicts Lin as a new icon of masculinity. He poses in a variety of settings from a tailor's studio to a posh restaurant to a magnificent mansion.

The book, as well as T-shirts with Lin's image, are now available in all Dolce & Gabbana stores in China.

Dolce and Gabbana have dressed famous athletes from football club AC Milan to the Italian National Football Team. The Italian designers met Lin at a party in Beijing four years ago. A longtime fan of the brand, Lin soon bonded with the designers and became a frequent guest at their shows.

"The commanding and charismatic personality of Lin Dan has intrigued us since the first time we met. His aesthetic sensibility, his taste for beauty, his elegance and innate affinity for fashion impressed us immediately," Dolce and Gabbana write in the preface of the book.

Lin was named brand ambassador in 2013. The fashion-conscious athlete came up with the idea of making a photo book and the designers were delighted to collaborate with him on the project.

"Number one, he is Chinese. And this is the first time for us to collaborate with a Chinese sportsman. Number two, he has very good style and nice looks. It's not easy to find a sporty and popular champion with style. It's like David Beckham in Europe," says Gabbana.

The pictures were taken over the course of two years in different locations and with different collections.

The looks are a mix of classic Dolce & Gabbana, which the designers chose for Lin, and the more fashionable pieces, which Lin chose for himself.

"He is a new face of the new Chinese generation," Dolce says. "It could be surprising for the Chinese audience to see an athlete styled like a movie actor and icon."

Best known for its sensual Mediterranean style, the brand will be able to attract more young consumers through the collaboration with Lin, experts say.

"He has a model-like body, he is charming, good-looking, healthy, powerful, hardworking and successful. Currently the brand image that Dolce & Gabbana has in China is 'luxury, sexy, feminine and extravagant'. Lin Dan could bring a more up-to-date image and help the brand better target successful, affluent young professionals," Kong says.

The house has previously used actresses Monica Bellucci and Scarlett Johansson to represent the brand in public. It has also dressed several female Chinese stars including Fan Bingbing and Bai Baihe. But it is yet to have a female Chinese ambassador. The designers believe everything has to come from genuine, personal connections.

"Everything starts with a relationship. I can't programme something from a picture. For example, we found Lin Dan and he came to see the show. Day by day, it has grown. It's like you meet somebody and you become friends. We don't want to choose from a catalog," says Gabbana.

Just months ago, the designers made a special capsule collection for the Chinese New Year, which highlights the signature Chinese red.

"Do you know why I'm so envious of the Chinese? Everything looks good on them. I'm not always like this," Gabbana says, laughing. "We love the contrast between the Sicilian style and the Asian people."

Chinese clients now frequent Alta Moda, the haute couture line of the brand that began in 2012. The shows have been held in exotic venues such as Capri, Venice and Sicily. Only top clients and a handful of selected media are invited. The number of Chinese clients has grown to around five, all of whom the designers have come to know personally.

"We become friends. It's like a Dolce & Gabbana family," Gabbana says.

During the party in Shanghai, these VIP clients naturally become the focus of attention with their gorgeous dresses the designers have personally tailored for them.

Dolce and Gabbana have been working together for more than 30 years. Regardless of the ups and downs in their personal relationship, their collaboration has never stopped taking the fashion world by storm. The latest example is the 2016 winter collection inspired by "the love for mamma", featuring pregnant models and small children in the brand's dazzling dresses.

Asked about the secret of working together so well for so long, the two burst into laughter.

"It's like the Chinese saying of 'the yin and yang'. The opposites attract. If you have the white, you need the black. If you eat rice all the time, you don't know the spaghetti," Dolce says.

Gabbana says, jokingly, that one would have to consult a mystic to learn how the two have worked together for so long.

"We love each other. We are like two brothers, modern brothers. I believe in him and he believes in me. I love him and he loves me. It's a sense of family."