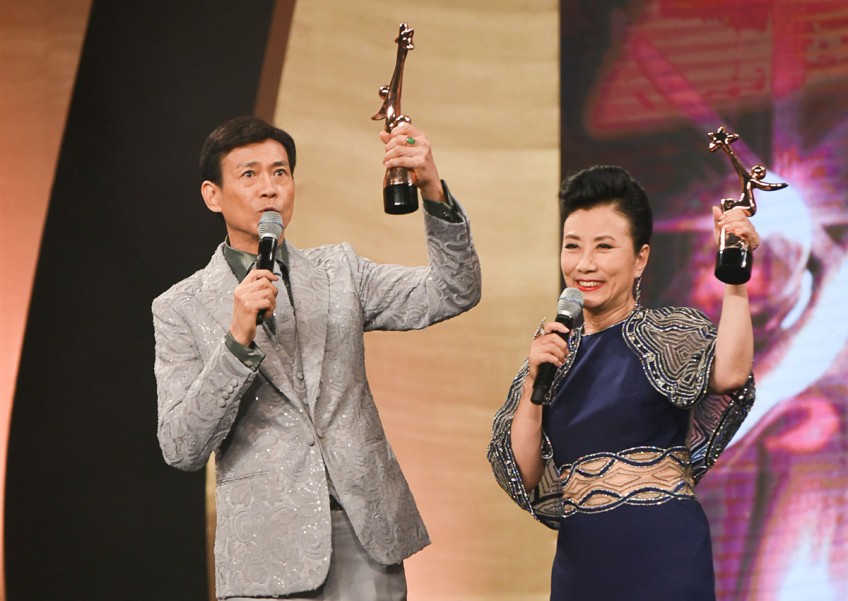 She and actor Adam Cheng took home the commemorative Star of the Stars, an award introduced this year for artists who have "forged a strong affinity with local audiences across his or her multiple roles throughout the years".

Speaking to the local media after the show, Wang, 68, said: "If you ask me to pick a classic character, I simply can't. I put a lot of effort into breathing life into each character."

She made her TVB debut in 1971 as a host on variety show Enjoy Yourself Tonight and went on to become TVB's leading actress with memorable roles such as a difficult mother-in-law in period comedy Wars Of In-Laws (2005).

She counts her recent drama Limelight Years (2015) as a good project that is hard to come by. In it, she plays a career-minded singer who wants to reclaim missed moments with her family. For the role, she won the My Favourite TVB Actress award on Saturday night.

Wang also shared the My Favourite TVB Variety Show Host award with her Sunday Songbird co-hosts Cheng and Jerry Lamb. Cheng, 68, said: "It looks like if I want to win a hosting award, I can't leave her."

The pair have worked together in dramas. They are regarded as TVB's golden couple of the 1970s, romancing each other in classics such as wuxia drama Romance Of The Book And Sword (1976).

Cheng said The Heaven Sword And Dragon Saber (1978) is his favourite drama, "because I shared some intense, intimate moments with Liza", he explained with a cheeky glint in his eye.

The gala ceremony, which is a fan event organised by Hong Kong TV station TVB and local cable operator StarHub, was in its sixth year. This year's theme was Walk Down Memory Lane, "a timely round-up to Singapore's Jubilee celebrations". The event was conducted in Cantonese.

A total of 33 awards were presented in 17 categories; 14 were decided by public votes.

In an ode to TVB history, Cheng showed off his vocal range when he belted out the theme songs of his dramas such as Chor Lau Heung (1979), while Singapore's musical cabaret trio Dim Sum Dollies dressed up as iconic TV characters.

Pamela Oei was the loving matriarch Auntie Hao from long-running family drama A Kindred Spirit (1995-1999), Denise Tan was the dapper Hui Man-keung from mafia classic The Bund (1980), and Selena Tan was the ethereal Small Dragon Girl from period drama The Return Of The Condor Heroes (1983).

Two other big winners of the night were actor Edwin Siu and actress Priscilla Wong.

The pair, who played police officer lovers in the drama Madam Cutie On Duty, won the My Favourite TVB On-screen Couple award.

They also became an item in real life. Siu, 38, got the crowd to sing Happy Birthday to his 34-year-old girlfriend, whose birthday was on Friday.

"Today, it doesn't matter if I don't get an award. I'm grateful to the organisers for inviting me so that I spend some time with her."