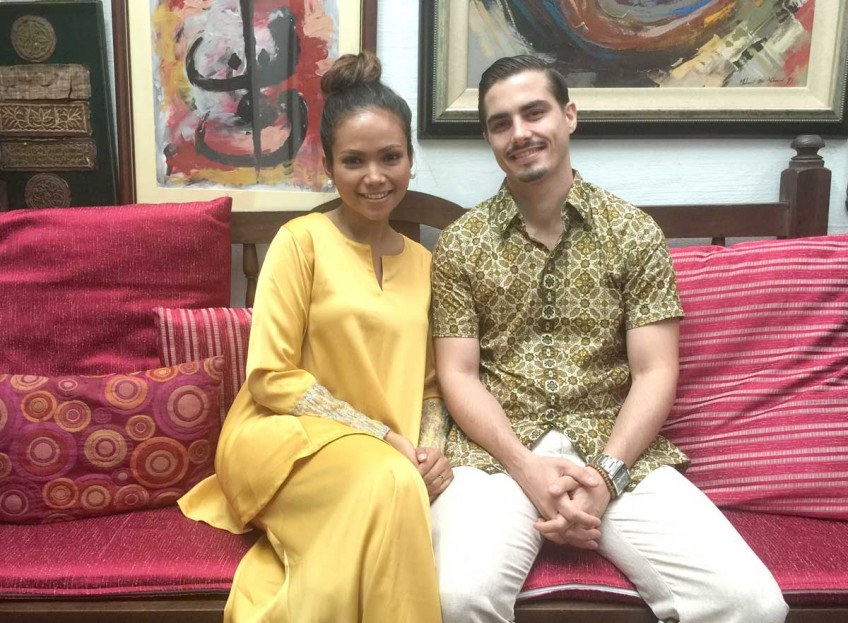 Nadiah M. Din with her fiancé.
The New Paper

This year's Hari Raya will be extra meaningful for local actress Nadiah M. Din and her fiance Bilal Jeanpierre, as it will be the first time he is celebrating it as a Muslim.

The 30-year-old French national, who has lived in Singapore for seven years, converted to Islam last October and has since been a practising Muslim, going for religious classes twice a week, praying five times a day and fasting during the holy month of Ramadan.

Mr Jeanpierre did try his hand at fasting last year "because of the health benefits... (like) getting a full detox".

He only set out to fast for the first three days, but ended up fasting for the whole month.

The client engagement manager told The New Paper: "When I started, I realised I could bear with it and it wasn't too bad.

"Whereas this year, as a convert, it's a different scenario. It's not just about not eating or drinking but praying as well."

Mr Jeanpierre said he converted not just to marry Nadiah, 25, a Muslim.

The couple have been dating for two years and will wed in December.

He said: "Honestly speaking, if I was not ready to convert, I would rather end the relationship because it's a big decision and religion is something you carry with you all your life.

"I was not going to force myself to do something I didn't want to do."

He said: "I have been exposed to Islam since I was a kid because my best friend and a lot of my other friends are Muslim.

"I've seen their lifestyle, been invited into their homes and their weddings and I start to see how they live and their traditions.

"What really fascinated me was the community, because in Islam, we are all brothers and sisters, so no matter where you go in the world, if you meet a Muslim, his duty is to welcome me. It's always fascinated me, that's the beauty of it. You are never alone."

His only fear when it came to converting was his family.

"I was scared before even talking to them. I needed to find the right words. I knew I was ready to take this step, but I wasn't sure if they were ready to accept the news," he said.

Mr Jeanpierre, whose family is Christian, ended up being supportive and wished him happiness. Nadiah said she was very straightforward with him right at the beginning, when they discussed marriage.

She said: "He didn't just have to get to know me but also my culture and religion.

"I'm not into civil marriage. I believe that if I want to marry someone, he has to be of the same religion so that our children will not be confused and we get to pray together, which (builds) a very strong foundation."

Just four months into the relationship, Mr Jeanpierre stopped drinking alcohol, something he used to do on weekends.

He said: "I was willing to change for her because I knew it would be her or these vices. And she was and will always be the obvious choice.

"She has been a big influence and she encouraged me throughout the process," he said.

This article was first published on July 5, 2016.
Get The New Paper for more stories.