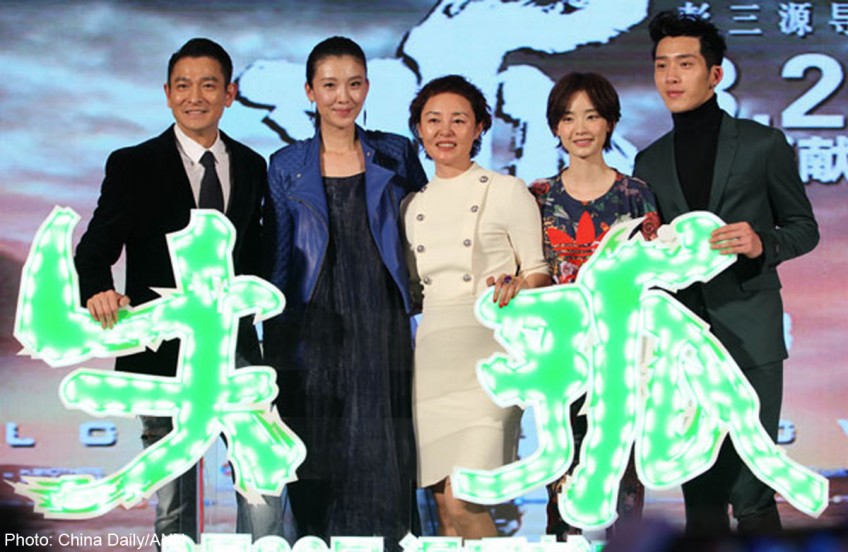 Cast members of the film Lost and Love (from left to right) Andy Lau, Ni Jingyang, Peng Sanyuan, Liu Yase and Jing Boran attend a premiere ceremony of the film.

Filmmaker Peng Sanyuan was stunned by the huge number of trafficked children when she first read a news report about the issue.

It is estimated that 1.2 million children are trafficked worldwide a year, and the trade in humans is worth $31.6 billion.

"These are shockingly large figures," Peng says. "In China, the number of missing children is huge. I felt I needed to do something to help those who have lost their loved ones in this way."

The result is her film Lost and Love, to be released on Friday.

Peng is known for her popular TV dramas on urban life. Lost and Love, the scriptwriter-turned-director's first feature-length movie, tells the heart-wrenching tale of a farmer who spends 15 years searching for his lost son.

The film is based on the real-life story of Guo Gangtang, a farmer in Shandong province who has trekked 400,000 kilometers across the country to look for his son.

"I interviewed Guo during Spring Festival in 2011," Peng recalls.

"When I walked into his empty home and was shown around places in the village where his son was last seen with the suspected trafficker, it was clear to me that after so many fruitless years of searching, this poor man's desperation had beaten him into submission."

Peng hopes to express more than just sadness, she says.

"The movie is also about love and belief in hope," she says.

"A good movie will not just make you cry, but also make you laugh and think."

Peng wrote a draft screenplay in 2013 after two years of research. She met more than 100 people, including victims－those who lost their children and those who were abducted during childhood, police and those who helped to find lost children.

She was then hit by a flash of inspiration. She decided that Hong Kong actor Andy Lau, well known for his cool and suave screen image, should play the lead role.

"I admired Lau's performance in the art-house production A Simple Life," Peng says. "He is like a rich mine－the deeper you dig, the more you find. He is loaded with a lot more than good looks."

However, when Peng put her casting ideas to her boss, Wang Zhonglei, co-founder of the entertainment giant Huayi Brothers, he was "scared", she recalls.

"I thought she was crazy," Wang recalled at a media event. "Lau is regarded as a film god. There was no way such a cool star as him was going to play an embittered farmer."

Peng signed a contract with Huayi in 2011, marking the start of her career transformation from a scriptwriter to a producer and director.

Although Wang rejected her idea, she called Lau's agent to see if he was interested in the movie.

"I was born in a rural area of Hong Kong," Lau says. "When I was a child, my dream was to be a farmer. The thought never crossed my mind that playing a farmer was something I could not do. I've done a lot of research on the kinds of gestures farmers make, such as squatting to eat food."

As Peng told her crew, making the movie is about more than a job.

"I think it's a citizen's duty to raise awareness of this sensitive topic," Peng says.

The thriving black market in child trafficking in China is widely believed to be fueled largely by the demand of buyers who want more children.

The maximum penalty for traffickers is execution, but those who buy abducted children generally get off scot free unless they have abused the children or tried to prevent them from being rescued.

A revised law draft made public in October proposed that those who harbour abducted children be criminally liable.

"If the laws are changed, even as a result of the minor influence of my movie, for me that will be a bigger thing than making money and winning prizes," Peng says.