Macau rolls out the red carpet for Asian Film Awards 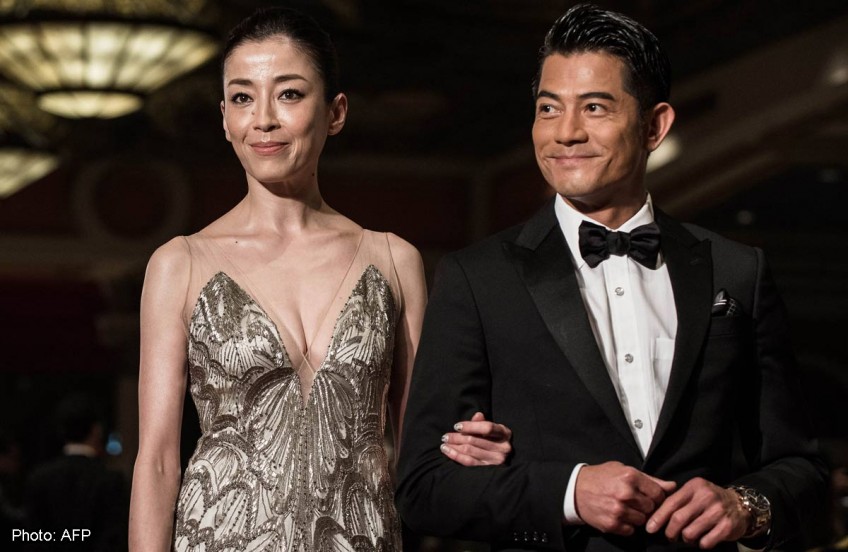 Japanese actress Miyazawa Rie and Hong Kong actor Aaron Kwok are seen on the red carpet during the 9th Asian Film Awards in Macau on March 25, 2015.

MACAU - Asia's movie greats converged on the gambling hub of Macau Wednesday as the city rolled out the red carpet for the Asian Film Awards.

Fans gathered at the luxurious Venetian resort for the star-studded event which showcases cinema from across the region, with 42 films competing in various categories.

The awards, organised by the Hong Kong International Film Festival and aimed at promoting regional cinema, are in their 9th year.

Movie heavyweights including China and India take on newer talents from Taiwan and the Philippines this year, with Hong Kong director Ann Hui's "Golden Era" - a biopic of acclaimed Chinese writer Xiao Hong - leading the pack with five nominations.

"You'd better give one to me, at least, or I will have to walk away with nothing," she joked when asked about the number of nominations the movie has.

India's "Haider", an adaptation of Shakespeare's Hamlet set in Indian-administered Kashmir, and Taiwan's "Paradise in Service", a story about an underground military brothel, also have four nominations each.

While the event is likely to be dominated by conventional powerhouses in the region, lesser-known cinematic talents are rising to the challenge.

"The developing network of filmmakers and film industries in the Asia-Pacific will strengthen the AFA and drive the globalisation of Asian films," Wilfred Wong Ying-wai, chairman of the AFA Academy, said in a statement.

The Philippines' Lav Diaz is vying for the best director prize with "From What Is Before", a black-and-white drama about villagers living in a remote backwater town.

Diaz was much lauded at home after winning top prize at the prestigious Golden Leopard awards in Switzerland last year.

Prominent Chinese actress Gong Li, who missed out at last year's Golden Horse Awards in Taiwan despite being a critics' favourite, will take on her best actress rivals with "Coming Home", a romance set during China's tumultuous Cultural Revolution era.

She goes up against compatriot Tang Wei who stars in "Golden Era", and Zhao Wei of "Dearest" which revolves around a father tracking down his missing son.

Also among the nominees for best actress is Indian actress Kalki Koechlin, of "Margarita, With A Straw", who said she was excited to be participating in the event for the first time.

Up-and-coming Korean heartthrob Doh Kyungsoo will vie for the Best Newcomer prize with "Cart", while the country's veteran actor Choi Minsik will compete for best actor with "Roaring Current".