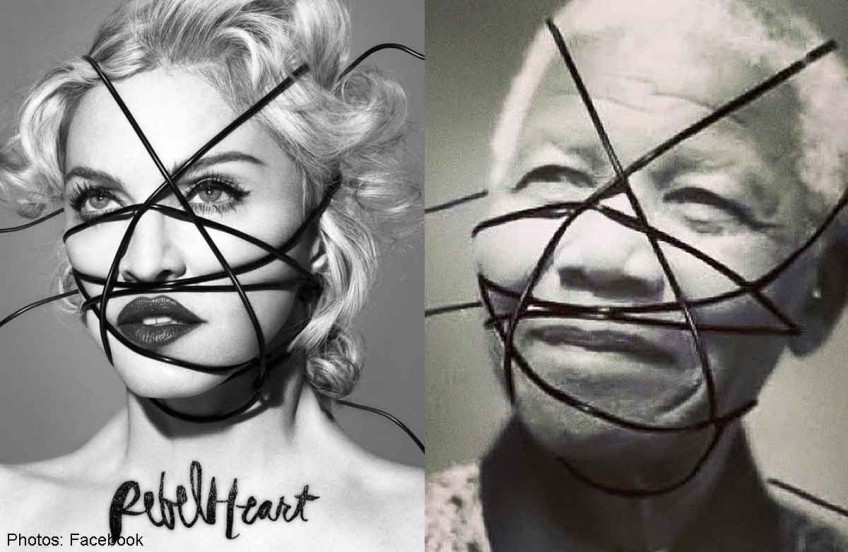 LOS ANGELES - Pop diva Madonna has hit back at criticism of images posted on her Facebook page showing iconic figures such as Nelson Mandela and Martin Luther King in bondage to mirror her latest album cover.

Photo-shopped portraits of King and Mandela were posted on Madonna's Facebook page on Friday to resemble artwork on the singer's upcoming album, "Rebel Heart", which shows Madonna's face criss-crossed with black bands.

But the association of the famously risque singer with anti-apartheid warrior Mandela and civil rights hero King appalled many commenters on Madonna's page.

"Lower and lower on the scale of bad taste," one unimpressed commenter remarked.

"Going too far. Your bondage mask works for you since you sell sex but take it off the men of integrity," added another.

Madonna remained defiant in the face of the criticism, pointing out the images were submitted by fans, and denying she was comparing herself to Mandela, King or any of the other personalities on her page given similar treatment, who included John Lennon, Joan of Arc and Britain's late Princess Diana.

"I'm sorry, I'm not comparing my self to anyone...I'm admiring and acknowledging there Rebel Hearts...This is niether a crime or an insult or racist!" Madonna wrote in a post full of misspellings.

"I also did it with Michael jaclson and frida khalo and marilyn monroe...am I saying I am them..NO..I'm saying they are Rebel Hearts too.

"And I didn't do it my fans did...And I just re posted those photos...my fans aren't racist either..if they put me in the same category as these other people Thank You.

"I hope one day to live up to 1 100th of what those people accomplished."