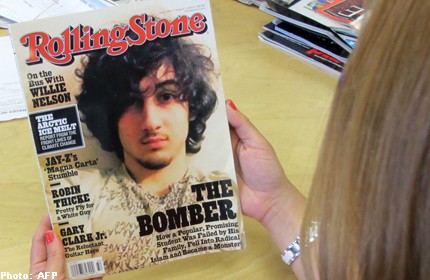 Rolling Stone magazine announced its next month's cover story on its website - and the photo on its cover generated immediate outrage on social media.

It said the cover story is a "deeply reported account of the life and times of the surviving Boston bomber Dzhokhar Tsarnaev, which delves into "how a charming kid with a bright future became a monster".

Disgusted in Rolling Stone said: "You put him on the cover? Shame on you!"

Akscribe wrote: "This cover...glorifies a mass murderer - and I'm sure it gives a big jolt to some copycat out there. Whoever approved this cover should be fired immediately."

Bostonrocks33 wrote: "This is gross!! ...Shame on Rolling Stones for putting that murderer on the cover in such a glamorous way!! Evil is evil & that's what this (is), nothing more!! I will never purchase your magazine ever!!!"

Tsarnaev and his brother, Tamerlan, have been accused of the April 15 Boston Marathon bombing which killed three people and injured more than 260.

The cover of Rolling Stone is typically occupied by rock stars and actors and many feel the cover is glorifying the alleged killer, Mail Online reported.

One comment went: "**** you Rolling Stone. I thought it was supposed to be an honour to be on your cover? Whoever subscribes to this worthless rag should cancel their subscriptions TODAY!!! This is unacceptable!!"

On Twitter, people have said that the cover looks similar to an old cover featuring Jim Morrison of The Doors.

"This cover makes him look like some kind of cool rock god... it's horrible," said another commentary on the magazine's Facebook feed.

The magazine said that its contributing editor Janet Reitman had spent two months researching for the story and had interviewed dozens of sources, many of whom spoke for the first time about the case.