Malaysian entertainer Namewee posted a video clip on Tuesday (July 10) showing himself as an ambassador for cultural exchange representing Japan at an event in Paris.

As it turns out, Namewee was invited to perform his viral hit Tokyo Bon 2020 at the Japan Expo 2018, and shared the stage with DJ KOO (leader of Japanese techno rave unit TRF or Tetsuya Komuro Rave Factory).

Japan Expo is an annual convention showcasing Japanese popular culture and entertainment; and its 19th edition was held at the Paris Nord Villepinte Exhibition Center from July 5 to 8 this year.

In his short video clip, Namewee described himself as a Malaysian musician who sings mainly in Chinese but strangely found himself representing Japan in France.

"I feel that music is a magical thing that can take you from one country to another, and then from that country to yet another.

"I've always said that music actually has 'feet'. It can take us to lots of places. Some of which we have never been before, yet our music has reached there before us," he said.

A catchy pop song written and composed by Namewee with cute lyrics in Japanglish (Japanese English), Tokyo Bon 2020 is also known as Makudonarudo (McDonald's in Japanese). And, the '2020' in the song title refers to the year that Japan is set to host the Olympics in Tokyo, as Namewee expressed a wish to take his song to the Tokyo Olympics. 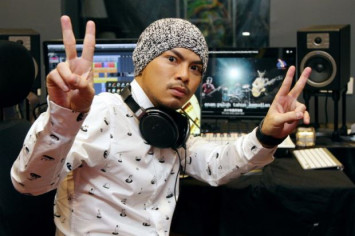 Namewee performed with Japanese actress-singer Meu Ninomiya (1,000 Year Princess) in the music video. Other famous Japanese YouTubers who collaborated with him on the quirky music video include RyuuuTV, YuuumaTV, MaoMaoTV, ShenLimTV, Mira's Garden, and Yuko Hayama.

The music video features musical arrangement using elements of Japanese instruments such as shamisen and Okinawan music style, and showcases tourist sites like Tokyo Tower and famous brand names along with traditional costumes and other cultural interests like Sumo wrestlers, ninja warriors and Bon Odori dancers.

The five-minute music video was released on Namewee's YouTube channel in November 2017, where it has chalked up 30 million views to date. There is even a dance version of the music video, choreographed by Japanese traditional dance expert Ukon Takafuji, for fans who want learn the Bon Odori dance steps for the song.