It's been almost 10 years since I last spoke to Mariah Carey, and surprisingly she hasn't changed that much. She still has that hourglass figure and that diva personality. But could that be attributed to her recent weight loss surgery?

She's no longer married to Nick Cannon, she's just parted company (again) with her manager, and she has no regrets.

Before the press conference begins, Carey performs the title song from The Star, Sony's entry in the animated film sweepstakes, which is a re-imagining of the Nativity story. Her two children accompany her on stage as back up singers.

The singing sensation not only collaborated on writing the song, but also voices one of the animal characters in the movie.

She's still sporting the million dollar engagement ring given to her by former fiance, Australian billionaire James Packer. They went through a nasty break-up. "It's on a different finger (now)," she says of the bling.

Christmas is very much on her mind, and characteristically she'd rather talk about that than her gastric sleeve surgery.

What does Christmas mean to you?

I love Christmas; there's something about the holiday season. I am doing a Christmas tour this year, and I have another project called All I Want For Christmas Is You, which is inspired by the song, and we did a children's book as well, so it's just something that I look forward to all year long.

Do you have a special tradition that you share with your kids?

I have so many traditions, everything from having a live reindeer to a Santa Claus. We will be in Aspen, and there is always snow. I have been doing that with my extended family for years, and now I want my kids to have that great experience as well. It's really about making them happy.

Do you read to your kids?

Actually they love their iPads so it's a task to get them to put those away. But my son is a great reader; he selects his own reading material which we approve, so he actually reads to me or we read together.

We have a great support system, and Nick and I have learned really well how to co-parent together.

What kind of a father is he?

Nick is a great father. We get along good, everything is so great between us, and I am very thankful for that, because I think it's important that kids feel that closeness with their dad.

Are you strict with your kids?

With some things. I want to be strict, but I also don't want them to be mad at me. So, I do the best I can.

Mary J. Blige told us how she was exploited by record companies. Your mother being an opera singer must have been a great protector?

I don't know if anybody can protect anybody in this industry.

Did she make sure you were not exploited?

I guess that's a matter of opinion. Unfortunately, there are very powerful people in the music industry, and I was starting out right after high school, so it was something that you just have to learn as you go and continue to learn.

I was lucky enough early on to have seen a documentary about The Beatles selling their catalogue. It taught me to hold onto my own catalogue as a songwriter because that is where the power is. A lot of artistes get signed to these deals where they give away everything, and they really don't have to do that.

How important was your mum in your life?

When you're in the entertainment industry, it's not the easiest thing in the world. My mum really made a lot of sacrifices. She was a classical singer, and she worked really hard. She went to Juiliard when she was 16 leaving her small hometown in Illinois.

She met my father and embarked on an interracial marriage, back when it wasn't really the thing to do. Both my parents sacrificed a lot.

How did that impact you?

It was very difficult. I didn't feel necessarily white or black. I didn't know what I was. My parents were divorced, and we moved around a lot, and I got made fun of because my mum didn't really know how to do my hair. She had naturally straight hair … nothing against that.

We didn't have a lot of money, so for me it was kind of a journey of self-discovery, trying to figure out who I was and who I should relate to. Was it my mother? Was it my father? He being African-American and she part Irish and white - it was strange, it was different, it was tough.

Did it make you stronger?

I guess it made me stronger. It really was an identity crisis for me as a kid because, being so nebulous looking and having people not really know how to put a name on what they saw.

And everything would change depending on what type of neighbourhood we lived in because we moved around a lot, with my mother. We moved like 13 times so there was always an adjustment period, but I guess it did make me stronger.

Through all your ups and downs, what has kept you going?

It's really interesting because as we go through different stages as artistes you do see the peaks and the valleys, and it does seem so much sweeter after you've kind of fallen and you figure out how to get back up.

I always rely on faith. I have a very strong, deep-rooted faith in God, and that's where I draw my inspiration.

What do you like to do in your down time?

I like to go on vacation, and I love swimming, that kind of stuff. I have someone that I work out with and we like to do water aerobics. It makes it less bleak to exercise when you can do it in the water. It's a little more festive.

How do you relax?

I take a bath. That's my favourite thing. I love long baths, relaxing with candle light.

Are you happy with who you are today? 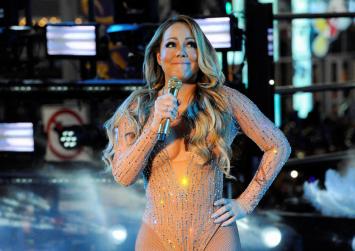 I can only be who I am, and I've had to come to terms with the fact that I am not going to look like everybody else.

It's one of those things where you just have to be strong enough to be yourself and stay happy with yourself.

Have you got over the failure of Glitter?

I feel it did hinder me a lot because I didn't have a support system - the right team for me as an actress and as a person - I didn't have the guide I needed then, and this is no offence to anyone, but that's what I learned.

You need someone that you fully trust and have a relationship with. And since then I've done a couple of independent films and each time I learn something new about myself and my ability.