The announcement of Shang-Chi and the Legend of the Ten Rings at Comic-Con in San Diego, California, over the weekend makes screen legend Tony Leung Chiu-wai the first Hong Kong actor to star in a Marvel Cinematic Universe (MCU) film.

Most eyes were on the casting of the first Asian superhero in producer Kevin Feige's lucrative film series, but the confirmation of Leung's role as the villain, The Mandarin, is far more intriguing. It sheds light on the narrative trajectory of the MCU's upcoming Phase 4 and marks a major departure by Marvel: a film predominantly made with China in mind.

Leung is joined by Chinese-Canadian actor Simu Liu and Asian-American rapper-turned-actress Awkwafina in the main cast. The film will be directed by Destin Daniel Cretton, known for the critically acclaimed film Short Term 12 (2013).

Here are five reasons why Leung's role matters both on and off-screen.

1. THE MANDARIN COULD SUCCEED LOKI AND THANOS AS THE MCU'S NEXT MAJOR VILLAIN

While he has so far only been mentioned in connection with Shang-Chi and the Legend of the Ten Rings, it is unlikely that Leung's character will be a one-off presence in the upcoming Marvel films.

The Mandarin was introduced to the MCU with 2013's Iron Man 3, in which Ben Kingsley controversially played an actor posing as the legendary terrorist.

In the 2014 short film All Hail the King, again produced by Marvel and starring Kingsley as the fraudulent Mandarin, it was revealed that the real Mandarin, unseen in the film, is the mastermind behind The Ten Rings, a once dormant terrorist group, and that the character is "a warrior king [who] inspired generations of men through the Middle Ages, perhaps even further back in time".

As the first MCU super villain to have his affiliates included in a film title, Leung's character is clearly of vital importance to the story line - and possibly beyond the confines of the announced Shang-Chi film.

2. IT ALSO MEANS THAT WE WON'T HAVE A FU MANCHU AS THE VILLAIN, THANKFULLY

When news of Marvel's plans to turn Shang-Chi into a live-action film broke last year, it was met with apprehension that the studio would also bring back the racist caricature of Fu Manchu, created at the time of the "yellow peril" phenomenon, born of fear of Chinese migration, in America in the early 20th century.

Fu Manchu was Shang-Chi's father in the original Marvel comics. Shang-Chi was half-Chinese, half-American in the comics.

Now that The Mandarin will be the antagonist in the Shang-Chi film, however, we can safely assume that Marvel has listened to Chinese critics and greatly reduced the role of Fu Manchu in the story, if not eliminated himr.

For a progressive-minded producer who is known to champion meaningful representation in films, Feige has certainly made the right call here.

3. LEUNG, A HOLLYWOOD DEBUTANT, IS A LEGITIMATE REPRESENTATIVE OF ASIAN CINEMA

The Marvel films have long had Asian faces in notable roles - Wong (played by Benedict Wong) in Doctor Strange , Mantis (Pom Klementieff) in Guardians of the Galaxy , Minn-Erva (Gemma Chan) in Captain Marvel.

With the Phase 4 films, though, we are seeing something new even to the MCU: the casting of Asian actors based in Asia. 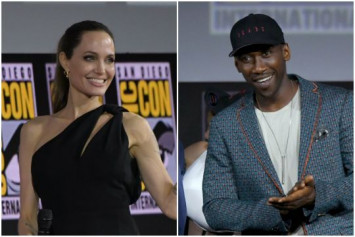 Leung is easily the highest-profile star from Chinese-language cinema to take a leading role in a superhero movie, dwarfing Fan Bingbing's supporting turn as Blink in 2014's X-Men: Days of Future Past .

Meanwhile South Korean actor Ma Dong-seok ( Train to Busan , The Outlaws), also known as Don Lee, will play a key part in The Eternals alongside the likes of Angelina Jolie and Richard Madden.

Leung is already an icon in China and a mainstay in international art-house cinema (courtesy of all those Wong Kar-wai heartbreakers), but his American debut will finally see him join the ranks of Jackie Chan and Chow Yun-fat as Hong Kong stars who have taken on bona fide leading roles in mainstream Hollywood blockbusters.

There is no doubt as to why Shang-Chi and the Legend of the Ten Rings has been given a release date of February 12, 2021 - it is the first day of that year's Lunar New Year, and the start of the hugely lucrative "Spring Festival" period in China's film release calendar.

With Liu (best known for the Canadian sitcom Kim's Convenience, but virtually unknown in China) cast as the titular "master of kung fu" and Awkwafina (star of Crazy Rich Asians , which flopped in China) in an unnamed role, it is left to Leung - by far the biggest attraction in the cast for Chinese viewers - to carry Shang-Chi in the world's second-largest film market.

After all, Leung's 2018 Lunar New Year release, Monster Hunt 2 , did break box office records in the first few days of its release in China.

5. THE ROLE OF THE MANDARIN WILL PRESENT A NEW CHALLENGE TO LEUNG

It's a thankless task for filmmakers to extract a touch of nuance and ambiguity from the villains of superhero movies, and Feige has done well to cast the most decorated actor in Hong Kong Film Awards history to help make his job easier.

Having won the best actor prize a record five times (for films including such classics as In the Mood for Love and Infernal Affairs), Leung should relish the prospect of portraying the mysterious bad guy - especially since he has seldom been given such an opportunity back home.

Thanks to his dapper appearance and benevolent demeanour, the actor has almost always been offered the part of the hero.

The closest you might get to an anti-hero portrayed by Leung in recent years is his part as a collaborationist in Japanese-occupied China during World War II in Ang Lee's Lust, Caution (2007), where he is still arguably the romantic lead!

Leung's dedication to training for his roles also bodes well for fans of action cinema. While he didn't start out as a martial artist (unlike Donnie Yen or Jet Li, for instance), Leung has more than proven his credentials as wing chun master Ip Man in Wong Kar-wai's The Grandmaster (2013), a perfect showcase for the actor's aptitude in combining the physical with the dramatic.