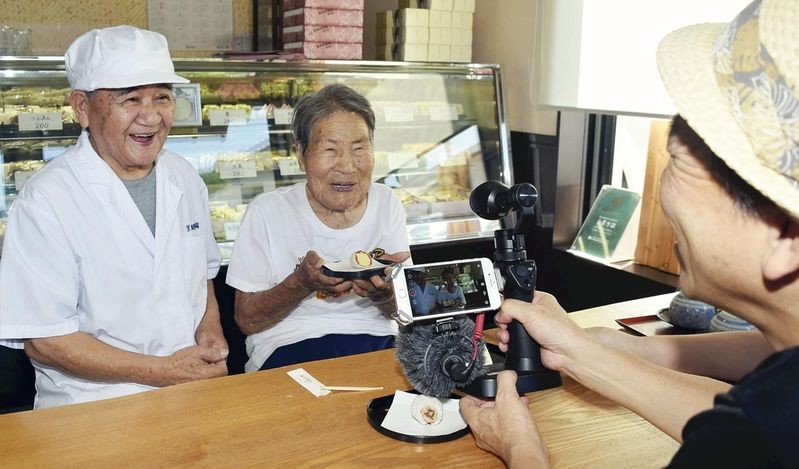 AMAKUSA, KUMAMOTO - A 100-year-old female announcer has debuted on Amakusa TV, an internet broadcaster based in Amakusa, Kumamoto Prefecture.

Known by her nickname Haruno-chan, Haruno Onita of Reihoku in the prefecture has become the second centenarian female announcer at the internet broadcaster following Shino Mori, who was active as the world's oldest female announcer.

"It's so delicious. It has the authentic taste of persimmon," she said.

The report was part of a segment that introduces popular Japanese confectionery in the Amakusa area. When listening to the explanation about the production method involving hollowing out a dried persimmon and then stuffing it with sweet bean paste mixed with an egg, Haruno-chan showed surprise, saying, "It is a treat requiring great care and time."

Amakusa TV disseminates information on the Amakusa area via the internet. Since its beginnings in 2001, the internet broadcaster has used elderly women fluent in the Amakusa dialect and with abundant life experience as announcers.

Hiroaki Kaneko, 59, president of the internet broadcaster, looked for her successor and found Haruno-chan, who was introduced as a "super 100-year-old" in a public relations magazine issued by the Reihoku Town Office.

He saw her playing ground golf and asked her to work as an announcer, thinking, "She is active and would be great for such a role."

Haruno-chan accepted the request and became the 10th female announcer for Amakusa TV.

Hailing from the town, Haruno-chan married Matasaku, who worked as a carpenter, at the age of 30. She worked at a coal mine in the town and also repaired fishing nets to help bring up her boy and two girls. Her husband died in 2007, and she now lives with her son, his wife and their child.

She is quite dexterous and good at knitting. She makes vests and other garments and gives them to her relatives and other people.

The secret to her health is exercise, she says. She started playing ground golf 25 years ago and still plays five times a month, frequently scoring a hole-in-one.

On Sept. 9, she took part in a ground golf event held in the town as the oldest participant. After playing, she changed into a T-shirt that says, "The world's oldest female announcer Haruno-chan" and did food reporting.

After debuting in August, she goes out to film once a week.

"The charm of Haruno-chan is her smile, just like Daikoku," the god of wealth, said Kaneko, who is in charge of shooting. "I hope she can continue for 10 or 20 years going forward while making people around her smile."

From here on, she is scheduled to report on local specialties and appear in a show to talk about her past experiences.