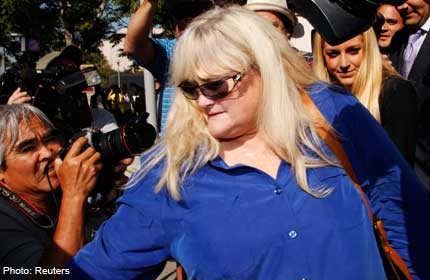 LOS ANGELES - Michael Jackson's doctors competed for his business and over-prescribed medications to help overcome his "incredible" fear of pain, the late pop singer's ex-wife testified on Wednesday in a wrongful death trial.

"His fear of pain was incredible. I think the doctors took advantage of him that way," Debbie Rowe said in Los Angeles Superior Court, which is hearing a lawsuit brought by the late singer's family against concert promoter AEG Live.

"Unfortunately, some of the doctors decided that when Michael was in pain they would try to see who could give him the best painkiller," added Rowe, 54, who met Jackson while working as an assistant for a dermatologist who treated the singer.

Rowe, who has rarely spoken publicly about Jackson, said the King of Pop was treated for several ailments, including lupus and severe scarring from burns on his head, which he suffered while shooting a television commercial for Pepsi in 1984.

She cried during parts of her testimony and grew frustrated under questioning about a timeline of Jackson's medical history, at one point shouting at AEG Live attorneys.

Rowe and Jackson were married from 1996 to 1999 and she is the mother of his two eldest children, 16-year-old Michael Joseph Jackson Jr., known as Prince, and Paris, 15. Rowe has no custody over the children, who live with their grandmother, Katherine Jackson.

Rowe, who now raises horses at a ranch near Los Angeles, will continue testimony under cross-examination by Katherine Jackson's attorneys on Thursday.

Katherine Jackson and Jackson's children are suing AEG Live over the singer's 2009 death in Los Angeles from an overdose of the surgical anesthetic propofol, alleging that the privately held company negligently hired Conrad Murray as Jackson's personal physician and ignored signs that the singer was in poor health prior to his death.

Murray, who was caring for Jackson as the singer rehearsed for his series of 50 comeback "This Is It" concerts, was convicted of involuntary manslaughter in 2011 for administering the propofol that killed the star.

'AT THE END OF HIS ROPE' Rowe said that she first time she saw Jackson use propofol was to sleep in Munich during his HIStory tour in 1997. Rowe said she observed him being administered the surgical anesthetic twice by doctors.

"Michael was at the end of his rope. He didn't know what to do," Rowe said, adding that the singer's hotel room looked like a surgical suite.

"He was more worried about not sleeping than dying because he couldn't perform (without sleep)," she said.

AEG Live has argued that Jackson, who was 50 at the time of his death, had prescription drug and addiction problems for years before entering into any agreement with the company.

It also has said that it did not hire or supervise Murray and could not have foreseen that the physician would have posed a danger to the singer.

Rowe, who has recently rekindled a relationship with daughter Paris, said that she first grew concerned about Jackson's prescription drug use in the early 1990s after he underwent surgery on his scalp.

"I don't remember if it (Jackson's drug use) was worse and worse, but it wasn't better and not lessening," she said.

Rowe testified that she took a prescription bottle of powerful narcotic hydromorphone from the singer's dresser at that time.

"You can't do narcotics forever. He (Jackson) knew that."

Members of the late singer's family including his mother, his eldest son and his nephews, T.J. and Taj Jackson, have already testified. Neither Paris nor Jackson's youngest child, Prince Michael Jackson II, known as Blanket, are expected to take the stand.