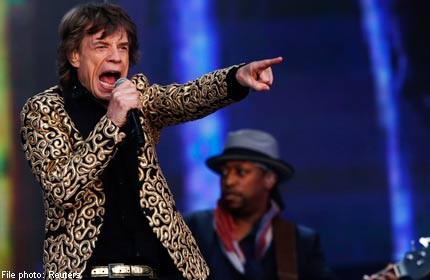 LONDON - Mick Jagger turns 70 on Friday - and though the Rolling Stones frontman isn't quite the image of rebellious youth he once was, he has lost none of his legendary swagger.

Strutting onstage in a sequinned jacket as the Stones headlined Britain's Glastonbury music festival last month, it was hard to believe this was a man who should be collecting his state pension.

One newspaper cruelly captioned its photos of the wrinkly British rockers "Night of the living dead!" - but zipping through the hits, the band had the same raw energy that brought them fame half a century ago.

"If this is this first time you've seen the band, do come again," Jagger told the crowd, suggesting that a quiet retirement may be some way off yet.

Between his onstage cavorting, wild bedroom antics and occasional brushes with the law, snake-hipped, rubber-lipped Jagger has been a model for generations of later rock stars.

"We were young, good-looking and stupid," he once said.

These days, cricket-loving Jagger is more likely to be spotted watching a match at Lord's than partying hard.

The Stones did prove they could still hit the dancefloor at Jagger's early 70th birthday bash last month, although by 1.30 a.m. it was time for bed.

The music-making hasn't stopped either - the band recently wrapped up a tour of North America to mark their half-centenary, and released two new tracks along with their greatest hits album "Grrr!" in November.

Romantically, however, Jagger seems to have settled down - he has been dating stylist L'Wren Scott, some 25 years his junior, for more than a decade.

His heyday was punctuated by high-profile relationships with models, singers and actresses, and he has seven children with four different women.

He twice married models - Bianca Jagger and Jerry Hall - while other ex-lovers include singers Marianne Faithfull and Carla Bruni, who is now married to former French president Nicolas Sarkozy.

Jagger has always been a curious mix of sensible and shocking. On one hand he has been knighted by Queen Elizabeth II; on the other, a rumoured sex act involving Jagger and a Mars bar has passed into rock legend.

Michael Phillip Jagger was born on July 26, 1943, to middle-class parents in Dartford, south of London.

He started jamming with childhood friend Keith Richards in 1960 after they discovered a mutual love of the blues.

The Stones played their first gig in 1962 - Jagger dropping out of the prestigious London School of Economics in the pursuit of fame - and three years later scored their first smash hit with "(I Can't Get No) Satisfaction".

Snarling and surly, they were the complete opposite of the family-friendly Beatles.

A string of massive hits across five decades followed including "Brown Sugar", "Honky Tonk Woman" and "Paint It Black".

And, of course, there were the band's off-stage antics.

Jagger and Richards were found guilty of drug offences in 1967, but their jail sentences were quashed.

The drug-fuelled hedonism continued, but between the excesses Jagger - who studied business before dropping out of university - kept a careful eye on the commercial side of things.

In 2011 Jagger set up SuperHeavy - a super-group including a member of Eurythmics, Bob Marley's youngest son Damian and soul diva Joss Stone - which released a widely-praised debut album.

He has also turned to cinema, trying his hand at acting in the 1970s and, more recently, branching out into film production. He is currently co-producing a biopic of the father of funk, James Brown.

The ultimate sign of Jagger's acceptance by the establishment came in 2003 when, to Richards' disbelief, he accepted a knighthood from the British monarchy.

The singer revealed last month that while he is proud of his achievements, he sometimes wishes he had pursued his earlier dreams of becoming a teacher, politician or journalist.

"It is a slightly intellectually undemanding thing to do, being a rock singer," he told the BBC.