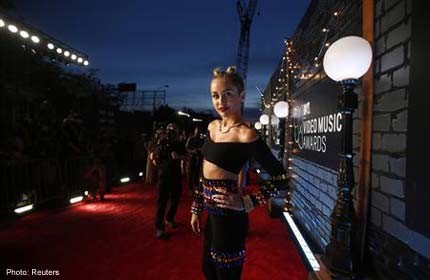 The "We Can't Stop" singer - who has ditched her squeaky clean Hannah Montana Disney image for a solo singing career as a tattooed sex siren - rebuffed an open letter from O'Connor calling on Cyrus to tone down her sexualized persona.

"Sinead. I don't have time to write you an open letter cause I'm hosting & performing on SNL (US comedy show Saturday Night Live) this week," Cyrus tweeted.

O'Connor, who once famously tore up a picture of Pope John Paul II on Saturday Night Live, declaring "Fight the real enemy!", said she was worried the former child TV star was being exploited in her latest video of the song "Wrecking Ball".

"I am extremely concerned for you that those around you have led you to believe, or encouraged you in your own belief, that it is in any way 'cool' to be naked and licking sledgehammers in your videos," the 46-year-old O'Connor wrote.

The Irish singer said her letter was written "in the spirit of motherliness and with love". She said it was a response to journalists who had asked her to comment on Cyrus telling Rolling Stone magazine that her new vampish look and video were modeled on O'Connor's 1990 video for the song "Nothing Compares 2 U", where she sheds a single tear.

Cyrus, who is the daughter of country music singer Billy Ray Cyrus, cries in the promotional clip for "Wrecking Ball". But she also licks a sledgehammer and writhes naked on a swinging metal demolition ball.

"I am happy to hear I am somewhat of a role model for you and I hope that because of that you will pay close attention to what I am telling you," O'Connor wrote.

Cyrus, 20, mocked O'Connor by posting a screen shot of O'Connor's tweets from 2012 in which the Irish star, who has bipolar disorder, referred to her own mental health problems, asking for Twitter followers to recommend a psychiatrist.

[[nid:37749]]
SUBSCRIBE TO OUR NEWSLETTER
Your daily good stuff - AsiaOne stories delivered straight to your inbox