It wasn't a picture perfect smile, choice of swimsuit or even a view on world peace that proved controversial in the judging of Miss Universe 2018. It was the ethnicity of the winner, Catriona Gray of the Philippines.

While many Filipinos cheered her win - the country's fourth victory in 67 years of the pageant - others felt she simply wasn't Filipino enough.

Gray, 24, who was born and raised in Australia, is of mixed Scottish and Filipino descent and many questioned whether her crowning was just the latest example of bias towards Western beauty standards.

"This Miss Philippines looks to me like a beautiful Caucasian with a pleasant tan," tweeted Friar Stephanos Pedrano. "These international beauty contests merely promote and perpetuate Caucasian features as the 'gold standard' of beauty."

Others echoed the view. "Proud of Miss Philippines but also wishing we had more indigenous faces in the media," wrote Nina Loleng. "She's beautiful based on Western beauty standards. Show me my wide-nosed girls with darker skin and coarse, frizzy hair."

As news of Gray's win spread on social media, it raised long-simmering debates not only about beauty standards and race, but about class and colonialism. Another Twitter user, Kuyachris, referred to the many billboards on Manila motorways advertising skin-whitening products, including one promising the "skin of the rich". "Class is connected with skin colour," said Kuyachris. "You're looked down upon if you're of darker complexion."

Francesca Ayala, a Hong Kong-based content strategist and self-identified feminist who grew up in Manila, says she became aware of the nation's Eurocentric beauty standards from a young age. 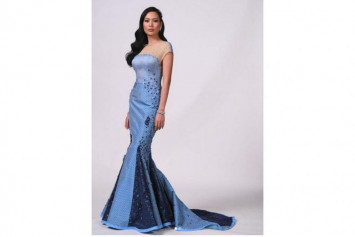 Her mother, a top model in the Philippines during the 1990s, had been extremely successful due to her "foreign" looks, according to Ayala, who is part Chinese. "My mother is light-skinned, her nose is narrow and a lot more Western-looking. I would say she isn't the standard [indigenous] looking Filipino."

To Ayala, this desire to be pale is not only about race, but class - with tanned appearances traditionally being associated with outdoor manual occupations, such as farming and fishing.

"The perception of having lighter skin means you come from a wealthier background, a more luxurious lifestyle," she said.

For Marvie Dela Torre, a university student in her 20s living in Quezon City, northeast of the nation's capital Manila, being attractive meant looking "mestizo" - or part Filipino, part Caucasian. It's a prevalent notion in Filipino media, she said, adding that an unusually large number of Filipino celebrities were mestizo.

"Fair skin, narrow noses, and large eyes represent the epitome of beauty," said Dela Torre. "It can be traced back to the different colonial periods when the Spanish and Americans influenced Filipino culture, and hence beauty standards."

The Philippines is not the only Asian country to have triumphed in Miss Universe; contestants from Thailand, Japan (Riyo Mori in 2007) and India have also won. However, critics of Gray's win point out that Thailand's two triumphant former title-holders - Porntip Nakhirunkanok in 1988 and Apasra Hongsakula in 1965, were fully of Thai descent.

But some have defended Gray's win, warning of the difficulties in categorising who, and what features, should be deemed as looking "Asian enough" to represent Asia.

"I think it's a slippery slope to try and define what 'Asian' features entail," said Tiffany Ap, the China bureau chief of Women's Wear Daily, an American fashion trade publication. "A lot of people think I am 'too dark' or 'too tall' for a Chinese and it's frustrating to be boxed in,' said Ap, who is of Malaysian-Chinese descent and grew up in Hong Kong and Australia. My hair is 'too wavy' for an Asian; I've been told that multiple times by Asian people.

"If an Asian person doesn't fit into your idea of an Asian, perhaps it's time to question the sources of the stories and images you see about Asia, rather than the person," she said. "If Miss Ireland doesn't have red hair and wins, nobody bats an eye, nobody judges whether she isn't Irish enough," she added.

Indian beauty queens have in the past been at the centre of similar storms, with Miss Universe 2000 winner Lara Dutta's perceived Eurasian features - she is of mixed Punjabi and British heritage - also proving controversial.

"Most Miss Indias don't look like the average Indian. But neither does miss America or Miss UK," said Ap. "The bigger picture is: why are white people allowed to fully showcase their own diversity - they can look different, they can behave differently, but for minorities, they need to fit them into their own box."

Michael Hurt, a visual sociologist based in South Korea says European features are favoured in beauty pageants because global perceptions of beauty are dominated by European standards.

"Whiteness is preferred in the world. We know that's problematic but what are we going to do about it. How do we fight something that is so profuse," he asked.

As Ayala put it: "We were a Spanish colony for 330 years, that mentality doesn't go away overnight."

According to Hurt, the real question is why people still bother with global beauty standards in the first place.

"I think the outcry over Gray's win is a perfect manifestation of this problem. People are angry that beauty standards are out of whack; beauty pageants literally pin numbers on people who look the best. Clearly, contestants are going to look a certain way and are going to reflect dominant beauty standards."

And even if Gray's victory has raked up a lot of ugly emotions, some have welcomed it for opening the debate. "Filipinos don't see this as a problem because it is so embedded in our culture," said Dela Torre. "I think [Eurocentric standards] are part of a problem Filipinos face everyday, but they are rarely brought up until a significant event like the Miss Universe pageant happens."