Monkey King journeys to the West 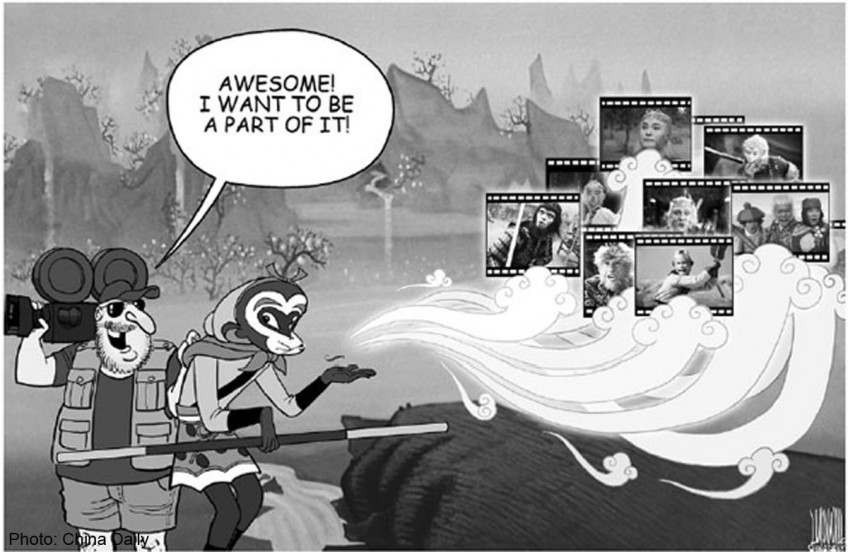 CHINA - Many people would squirm at the very thought of an American Monkey King, while some might welcome it as a creative idea. But no matter what people think, Journey to the West is set to be made into an American TV series.

Titled Badlands, the series will be produced by AMC and will hit the small screen next year or in early 2016. According to AMC, actors-directors Stephen Fung and Daniel Wu will join the production team to give shape to the TV series based on one of the "Four Great Classical Novels" of Chinese literature.

Compared with the other three great novels (Outlaws of the Marshes, Romance of the Thee Kingdoms and Dream of the Red Mansion), Journey to the West has been a favourite of filmmakers, according to a survey. In fact, 96 per cent respondents to the survey said they have seen one or more such adaptations.

Monkey King journeys to the West Besides, this is not the first time that overseas filmmakers have shown interest in the Journey to the West. The novel has already been adapted for films and/or TV series in the United States, Japan, South Korea and Vietnam. Since the story is rather popular in Japan, it has found its way into films, animations, TV series and even video games.

In fact, the recent past has seen Japanese TV stations churning out at least five versions of the classic tale. And perhaps the most bizarre version was made by Fuji TV in 2006. The TV station did invite popular actors, including one from Japanese national idol group SMAP, to play the role of the three apprentices of the Buddhist monk. But then it offered the role of the monk to Eri Fukatsu, that year's most popular actress. As if the absurdity of the monk being turned into a nun was not enough, the series makers also made her fall in love with the Monkey King.

Fuji TV's treatment of the novel was as ridiculous as the one in the 2001 American version, The Lost Empire, which portrayed the monk (fortunately, played by a male actor) and Guanyin (the goddess of mercy) as lovers.

Quite naturally then the news of an American Monkey King is generating a lot of buzz on the Internet, with most netizens fearing that it would be another bad adaptation of the classic work. The fact, however, is that film and TV series makers across the world have adapted, extended, altered and/or distorted even the best literary works, Shakespeare's plays, for example. And despite that, we cannot deny filmmakers the liberty of interpreting a work of literature the way they want to.

Journey to the West, written by Wu Cheng'en in the 16th century, is itself a creative and extended interpretation of the trials and tribulations of Tang Dynasty (618-907) monk Xuanzang during his journey (with his three disciples, including the Monkey King) to India to obtain the sacred Buddhist texts (sutras).

The "original", and by far the most popular TV series on Journey to the West was made almost three decades ago (1986, to be precise). And it owes much of its popularity to Zhang Jinlai, better known as Liuxiao Lingtong, who immortalized the role of the Monkey King. Local TV stations (and even China Central Television) have been re-telecasting the series during summer and winter vacations since then. According to rough estimates, the 1986 Monkey King production has been re-telecast more than 2,000 times - the most for any TV series based on a classic work of literature.

A measure of the popularity of the 1986 series is that the adventures of the Tang Dynasty monk and his three fantastic, and at times quirky, disciples have found their way into eight productions but none has been even half as popular as the "original" one with the Chinese audience.

In contrast, despite the use of advanced American filmmaking equipment and technique, The Lost Empire couldn't attract viewers and folded up with one of the lowest ratings for a miniseries on NBC.

So, instead of reaching hasty conclusions on the outcome of the new TV series based on the Journey to the West, we should wait until it is telecast and let viewers decide whether it's good or just another ridiculous attempt to capitalise on the popularity of the novel.