The moral instruments: City of Bones 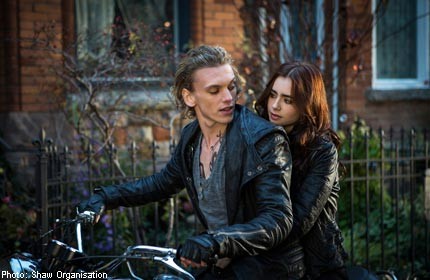 I really wanted to love this one. Like you, I've been waiting for the next Harry Potter or the next Twilight. Sadly, this isn't it - at least not for me.

There seems to be two or three of these based-on-a-bestseller would-be franchises coming out every year.

Here we are with The Mortal Instruments: City Of Bones, and I can't help but feel it's also destined for the scrap heap.

The main problem with the flick is the same problem that so many of these me-too blockbusters have - its casting.

Bower is supposed to be part angel, but he looks demonic. Beautiful, but still demonic. Collins, our heroine, is certainly a pretty girl, but her appeal basically stops there.

As she already proved in Mirror Mirror, her eyebrows are the most interesting thing about her. She's kinda boring.

Another problem with City Of Bones is that director Zwart has got ants in his pants. I've never seen a movie in such a hurry to be over.

Clary's makeover scene - in which she is transformed from a normal girl into a buttkicking, black-clad demon-huntress - could have been so fun, but Zwart just skips past it.

He does this again and again.

If he doesn't care, why should we?

The Twilight Saga was a freak of nature, becoming the global phenomenon that it is and always will be. For all those poor, unfortunate movies that followed in its wake, comparisons will always be made. (The Hunger Games is in a league of its own though.)

I didn't like Twilight, but I kind of enjoyed City Of Bones. Maybe I was in the right mood, or maybe it's simply because they don't take themselves too seriously. It is set in a fantasy world after all - there are half-angels, demons, werewolves and vampires!

I liked that the plot moves fast and doesn't drag on like Twilight, thus making it less of a torture, to put it bluntly.

The story of one girl's willingness to do anything for her mother is something I can connect better with than a whiny girl pining after her immortal love. City Of Bones is more in the vein of an action adventure than a drawn-out romance - maybe I'm just not a romantic.

As one who has read all the books - a 19- hour flight to Los Angeles to interview the cast is a long journey - the casting is pretty spoton.

Bower and Collins are no Oscar-calibre actors, but they make a very telegenic couple and he nails Jace's smugness as described in the book.