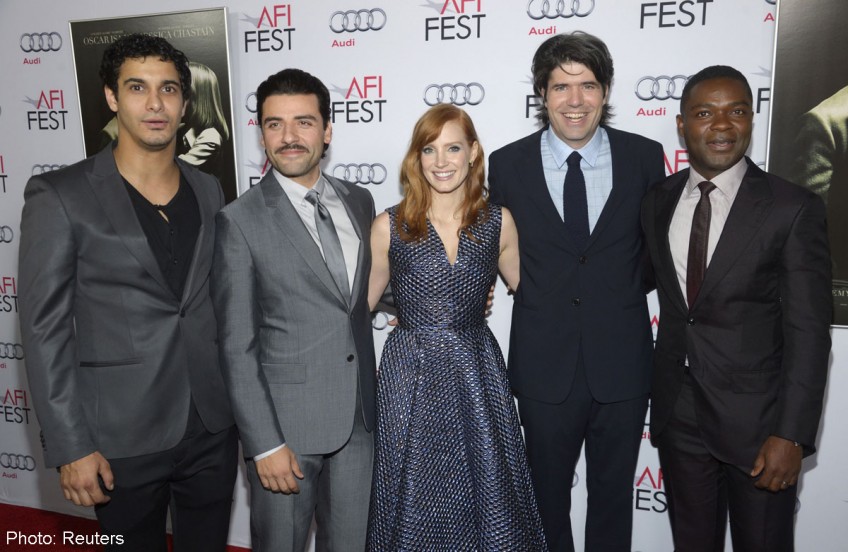 LOS ANGELES - One of this year's hottest independent films - watched closely in the Oscars race - is the gritty thriller A Most Violent Year, set in crime-ridden 1981 New York.

The film, whose restrained style slowly builds powerful suspense amid acerbic humour, tells the tale of immigrant entrepreneur Abel Morales, who aims to build an oil empire with the help of his wife, played by Jessica Chastain, heiress of a fallen oil tycoon.

"For a long time, I had this idea about a husband and wife working together," writer-director J. C. Chandor told AFP.

"I wanted the hero of the film to be Hispanic, because it (reflects) the most important recent wave of immigration" in the United States, he added.

"This movie is about ambition, and that's what immigration is about, building something better than what you've left behind."

A Most Violent Year, which opens in US theatres on Wednesday, takes place in 1981, statistically the most violent year in New York's history, with police completely overwhelmed.

Morales, faced with a series of brutal, anonymous attacks against his business and employees, tries desperately to protect his property and family.

The businessman has few scruples and only fears failure - but he does not want to break the law - while his wife and his lawyer (Albert Brooks) push him to take more radical measures to stop the attacks.

Chandor was writing the script just as a tragic shooting took place at Sandy Hook Elementary School, in which a disturbed young man killed 26 people, including 20 young children.

The director said he lived near the Connecticut town and was struck by the thought that "it could have happened in my daughter's school".

"It made me think of this idea of escalation, how an act of violence ripples (through) society," he said.

Morales is played by Oscar Isaac, known for his star turn in the Coen brothers' Inside Llewyn Davis (2013) and who is featured in the upcoming Star Wars movie. His portrayal evokes a young Al Pacino from The Godfather. Morales is "a person who feels like he's in the equivalent of a war zone", Chandor said.

The film has received rave reviews from critics, with a 95 per cent positive rating on aggregator RottenTomatoes.com. It won accolades at its premiere at the AFI festival in Los Angeles last month.

Co-star Chastain was nominated for the best dramatic actress Golden Globe and the film is expected to get a slew of nominations at the upcoming Oscars.

It marks Chandor's third feature film, after Margin Call, inspired by the financial crisis, and All Is Lost, with Robert Redford as a man lost at sea. In his films, Chandor puts his characters in crisis, with either their survival or that of a major company - or sometimes both - in question.

The characters must make decisions about acts against their moral code, sometimes committed in the name of survival, with some trying desperately to hold on to their ethics and not lose their soul.

His next film will take on one of the worst disasters to hit the US in recent years.

Starring Mark Wahlberg, Deepwater Horizon will explore the explosion and sinking of the offshore oil platform operated by BP, which sparked the worst oil spill in US history.

It's a "poetic tragic take about where is our relationship with oil - which is we want it, we need it and it's getting harder to find", he said.

"We all need oil, we all use oil", and yet "someone has to find it for us, so we are far more guilty than these people" who work in the oil industry, Chandor added.