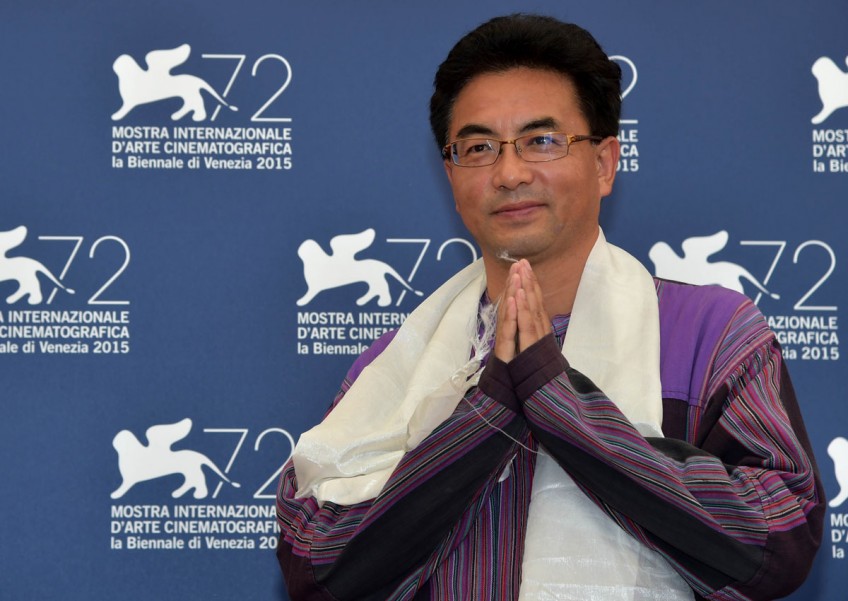 Stereotypes of the Himalayan region are deeply ingrained in China, whose six million Tibetans - less than half of one percent of the total population - are often presented to the Han majority as exotic and rugged features of the wild west, framed more as a tourist attraction than people.

But Tseden's films, featuring all-Tibetan casts and almost entirely in Tibetan, mostly deal with the collision between modern life and traditional culture, and its impact on the individual.

"Some people think Tibetans are very mysterious and mystical, that they live in the sky, but through my works I want to show Tibetans are ordinary people and change some people's thinking," Tseden told AFP.

It is a daunting task, with Tseden fighting against a narrative often reinforced by China's vast state media and propaganda machine as it seeks to promote "ethnic unity" and snuff out any sign of what Beijing sees as separatism.

His latest work "Tharlo" opens with the title character, a shepherd, reciting from memory "To Serve the People" in Mandarin Chinese, a passage from revolutionary leader Mao Zedong's Little Red Book, and hoping he will live up to its Communist ideals.

It follows him as he travels from the pastures to the city to get a photo for his government identity card.

Tharlo finds his austere existence called into question after meeting a hairdresser who promises she will run away with him, if only they had the money from selling Tharlo's flock - not all of which he owns.

"He is confused about his own identity, he's not really sure about it, so he needs to go looking," Tseden said. "In Tibetan areas, this kind of case is still very common." The character's dilemma reflects Tseden's personal transformation as a son of nomads who now shows films at international festivals. A soft-spoken man who rarely shows emotion, he is clearly uncomfortable in the spotlight himself.

But it is currently facing off against works by titans Jia Zhangke and Hou Hsiao-hsien - who won the best director award at Cannes this year - at the world's premiere festival of Chinese cinema, Taiwan's Golden Horse.

It is among the five nominees in both the best feature and best director categories, with the winners to be announced on Saturday (Nov 21).

The monochrome footage mutes the towering mountains that are the centrepiece of many films about Tibet, and highlights the contrasts of China's efforts to modernise underdeveloped areas.

One exterior shot of Tharlo's mud brick home shows towering pylons standing alongside, while the hovel itself lacks electricity.

A review on the website of trade publication Screen International said it was "a beautifully judged picture from a director to note".

- Minority report - Born in 1969 in a Tibetan area of Qinghai province, Tseden said he knows many Tibetans like Tharlo, who may not be able to read a single Chinese character but have memorised propaganda that was forced on everyone of a certain age in China.

Even so he grew up loving the slapstick comedy of Charlie Chaplin. After graduating from university he spent a year as a government official before going back to school, first studying translation and then cinema at the prestigious Beijing Film Academy.

His 2005 movie "The Silent Holy Stones" was the first full-length film to be shot entirely in Tibetan.

As a whole, the Chinese film industry is booming, with ticket sales for domestically made films raking in 16.2 billion yuan ($2.5 billion)last year, up 27 percent, according to the State Administration of Press, Publication, Radio, Film and Television, which regulates the media and censors its output.

But despite international acclaim, minority films have a precarious future in China, not least because of a dearth of cinemas in Tibetan regions, with most films watched on pirated DVDs.

"Compared to mainstream Chinese-language films and commercial movies, the space for development for ethnic minority films is small," Tseden said.

"It's hard for a film that's made on the fringe to integrate into the wider market... and one reason is censorship." Authorities have stopped some of his scripts being filmed, although Tseden said he now understands the system better and "Usually there won't be a big problem".

Officials only requested minor changes for Tharlo, he said - declining to give details - even though the movie centres on modernisation corrupting the shepherd.

"Urbanisation has definitely impacted traditional lifestyles and that impact has been huge," Tseden said. "Their lives change, they enter the city, a new environment, and they can't adapt, they can't survive".