On the move with cranes and kids 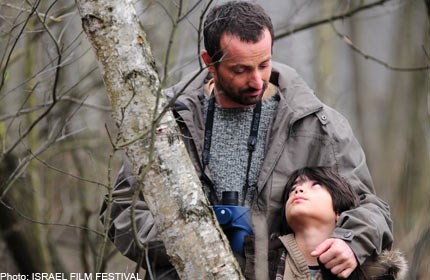 The 2012 family drama, which will be screened here as part of the 21st Israel Film Festival next week, stars first-time child actor Itai Shcherback, 11, and features many shots of cranes in the wild. Ruman, 34, tells Life! over the telephone from his home in Tel Aviv that many people thought he was "crazy" for taking such a risk, especially for a debut feature.

He says with a chuckle: "People were wondering why I would want to do this. They kept asking me, 'Are you sure about this?'" He insisted on making the movie as it was a story that he really connected with emotionally, he adds.

The US$1-million (S$1.2-million) film adaptation of Aki Shavit's children's book of the same name is a migration story that mirrors his own life experience.

The film is about a boy named Igor who moves from Russia to Israel where he faces difficulties as he does not speak the local language. He finds solace in charting the migratory patterns of cranes that fly from Eastern Europe to Africa.

Ruman, born in Belarus, was also part of the migration experience when he moved to Israel at the age of 11.

He says: "I really had a connection with this story and I felt that was really important for a first feature. When I first moved to Israel, I also faced the same problems as the boy Igor. "I didn't speak Hebrew and there will be cultural differences, so I definitely felt like I could relate to this story on a personal level."

Igor & The Cranes' Journey is the opening film of the week-long film festival which will be held at The Cathay Cineplex. Other films include We Are Not Alone (2011), a drama about a lonesome security guard who makes an unlikely friend in a rebellious woman, and Fill The Void (2012), a drama about a young woman on the cusp of marriage who has to choose between living up to family expectations and following her own heart.

Ruman, who is married with no children, admits that he faced "many difficulties" getting the main child actor as well as the children playing his classmates to stay focused throughout filming. "Kids lose their concentration very easily, especially in this technological age. They move a lot and go immediately to their mobile phones whenever possible," he says.

Still, he managed to get through the 23 days of filming without too much trouble. The key to working successfully with children, he says, is "not to treat them like children". "Your instinct when you talk to kids is always to talk down to them because they are kids. But they don't like that. Just talk to them like you are talking to an adult and you'll work so much better together," he adds.

"I talked to Itai about his character the same way I would talk to the other adult actors about their characters."

It took him more than half a year to cast the boy, he adds, because of the difficulty of finding a Russian speaker in Israel. "I didn't want to just get any kid and make him pretend to speak Russian because I wanted the pronunciation to be as accurate as possible. Itai showed up in the last wave of auditions after six months and I'm so happy we finally found the right boy."

As for capturing the cranes on screen, he had the help of nature experts to secure footage that he could not get.

"Most of the cranes were shot in the Hula Valley in the north of Israel, where there are more than 50,000 cranes passing every winter. For the footage we couldn't get in Israel, like the baby crane hatching from an egg, we got from nature photographers and composited them into our footage. It was more of a technical challenge, really, due to the complex post-production process."

"The story appeals to children but it's also a warm family movie. It's a film that the whole family can see together," says the film-maker.

He is now simultaneously developing a few projects, including a historical epic as well as a "very low-budget movie", whose details he could not disclose.

But there is one common thread among them at the back of his mind. He says with a laugh: "I enjoyed making my first feature film very much but I think, maybe for my next project, I probably won't be working with children anymore."