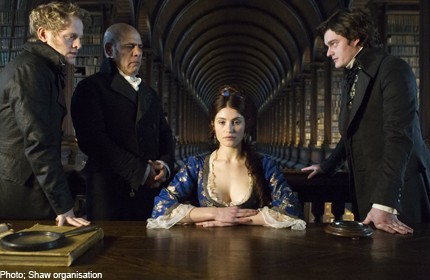 Vampires Clara Webb (Gemma Arterton) and her daughter Eleanor (Saoirse Ronan) have been on the run from a mysterious supernatural police force for 200 years. They hide in the abandoned Byzantium Hotel, where they hope to maintain a low profile. When Eleanor falls for a human, Frank (Caleb Landry Jones), she feels compelled to tell him the truth about her vampire identity.

In an age when sparkly lovesick teenage vampires are all the rage, a darker, more elegant vampire flick is a welcome change. Byzantium is not Irish film-maker Neil Jordan's first foray into a vampire story. It ventures into similar territory as his Oscar-nominated Interview With The Vampire: The Vampire Chronicles (1994), starring Brad Pitt and Tom Cruise.

Once again, Jordan examines the question of immortality and whether it is a blessing or a curse. But Byzantium also offers sexual politics and ideas of female empowerment.

Based on the 2007 play A Vampire Story by Moira Buffini, who also penned the screenplay here, the central characters are a feisty mother-daughter pair of vampires who refuse to let the men in their lives dominate.

Although the elder vampire, Clara Webb, prostitutes herself to get by, she is no victim: Any man who crosses her will have his blood sucked dry almost immediately.

Her teenage daughter Eleanor - played to haunting perfection by the delicate Saoirse Ronan - is the gentler, more compassionate vampire who only kills those already wilting on the death bed.

Posing as a college student, she finds herself falling for sickly creative writing classmate Frank and is conflicted about whether it is even possible to pursue a relationship with him.

Giving the intriguing set-up, it is a pity that Jordan gets the movie pacing all wrong. The character development and plot build-up, for the most part, are much too slow, and none of them is truly engaging until only the film's final third, when the vampires' backstory is revealed.

Only then do you finally see the two as more complex, interesting characters. Clara is really just a vulnerable mother figure who wants the best for her child.

Up to that point, she is given little to do other than to seduce one man after another. As alluring as Arterton looks giving lap dances in lacy lingerie, these scenes quickly feel repetitive.

Redeeming the poor pacing are the consistently breathtaking visuals - even the goriest of scenes are beautifully shot. The scene of a grand waterfall overflowing with bright red blood is one particularly stunning image that will stay with viewers long after the credits roll.