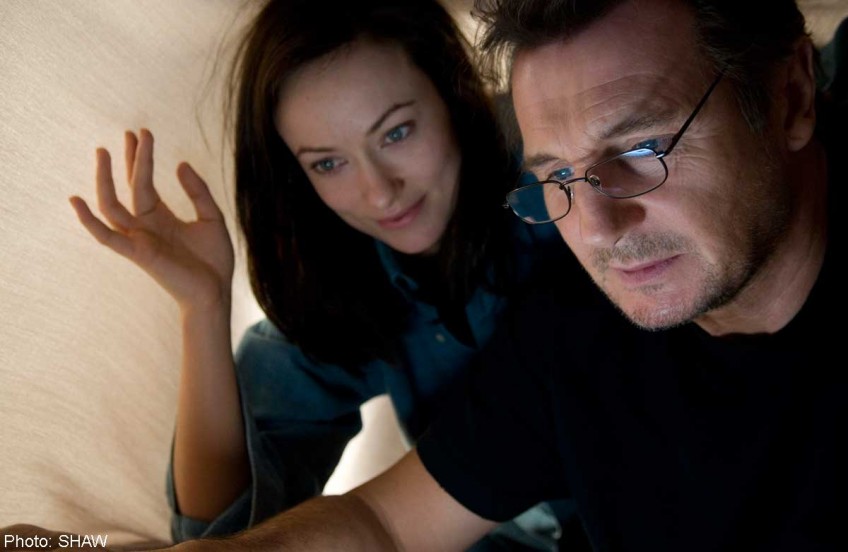 Liam Neeson and Olivia Wilde as lovers in Third Person.

The story: In the first of three story threads, novelist Michael (Liam Neeson) is in Paris, receiving his lover Anna (Olivia Wilde) while trying to write a book that he hopes will redeem his flagging reputation. In the second story, Julia (Mila Kunis) is a New York hotel cleaner trying to gain custody of her son, now in the care of his father Rick (James Franco). She is blocked at every turn by Rick and the legal system, which deems her too reckless to be a fit parent. In Rome, shady businessman Scott (Adrien Brody) meets a Romanian woman Monica (Moran Atias). He becomes enmeshed in a scheme to rescue her daughter, an illegal immigrant, from gangsters.

Writer-director Paul Haggis' Crash (2004) scooped up a clutch of Oscars (including Best Picture), a feat he followed with writing credits for the well- received Clint Eastwood-helmed war dramas Flags Of Our Fathers (2006) and Letters From Iwo Jima (2006), as well as for the excellent James Bond reboot Casino Royale (2006).

This was followed by a string of flops or middling-quality works, including the weakest Bond film to date, the muddled Quantum Of Solace (2008).

This new film is perhaps his attempt at going back to his roots. Like Crash, this contains disparate story threads, each with its own suspense elements, but all contained within a larger meta-puzzle of how each relates to the other.

Crash was a controversial win (at the expense of Brokeback Mountain, among others, for Best Picture), not least because of how its plot relied on coincidences to work and this work relies heavily on chance discoveries and happy accidents.

Haggis makes an attempt at tying up his threads in a manner that makes more sense this time, but he does so through the use of a whopper of a plot contrivance. To his credit, the final reveal is shot and edited with great style, which goes a long way in dealing with the feeling that cheating has occurred. He also foreshadows skilfully. The hints are there, to be discovered in retrospect.

None of these technical points matter if the stories that make up the threads do not engage. They do, but barely.

Kunis' Julia embodies the idea of the "working poor", a woman unable to get ahead in life because staying afloat takes all her time and energy. Julia's lack of common sense is frustrating to watch but Kunis' performance wins audience sympathy.

Brody is Scott, a morally compromised businessman who buys designs stolen from couture houses on behalf of fast-fashion chains. Scott and the mysterious Monica (Israeli actress Atias) have the most thriller-like arc of the three, filled with money drops and brutish Slavic gangsters. Their attraction to each other, however, is the least interesting and the least comprehensible of the three.

Neeson and Wilde, as the pair of lovers with a troubling secret at the heart of their relationship, make the most of their overwrought characters, the unhappy writer Michael and his damaged muse Anna.

Michael, the tortured scribe looking for a hit, is an obvious stand-in for Haggis himself. There is some self-indulgence here (gorgeous and artistically inclined women find him irresistible) but that is a small sin. What is worse is that Haggis weighs down Michael's story with melodramatic freight, little of which feels warranted by events.