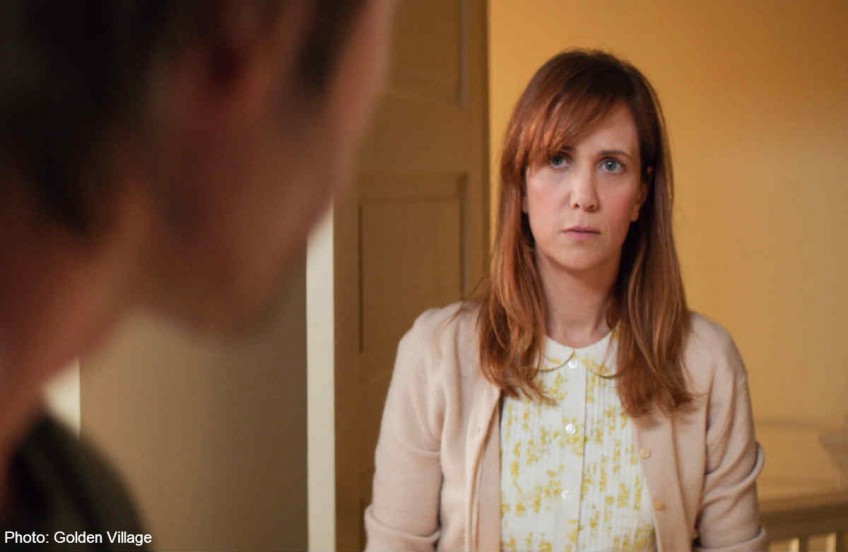 Kristen Wiig is a mousy housekeeper who has never been romanced before.

The story: Housekeeper Johanna Parry (Kristen Wiig) finds a new job cleaning the house for the elderly Mr McCauley (Nick Nolte) and his granddaughter Sabitha (Hailee Steinfeld). As a cruel joke, Sabitha starts writing romantic e-mail to Johanna, claiming that they are from her estranged father Ken (Guy Pearce), who lives in another city. Johanna is intrigued and interested in finding him.

Let it be known that Kristen Wiig does, in fact, have serious acting chops.

The funnywoman, who is best known for her Comedic flair in Saturday Night Live and Bridesmaids (2011), has been trying to go the dramatic route of late, doing non-comedic roles in movies such as Friends With Kids (2011) and Girl Most Likely (2012).

While she was always competent in them, she never really got to shine as the star - until now.

Here, she is the sole reason to even catch the film at all.

So restrained and subtly affecting is her performance as the mousy housekeeper Johanna that you completely forget the crazy goofball parts that have so far made up the bulk of her resume.

Taking awkwardness to a whole new level, her delicate portrayal is in turns compelling and uncomfortable to watch, only because you often feel so sorry for her character.

So when Johanna discovers that another man possibly has feelings for her, there is something almost inspirational in the way she then works to be with him. This completely innocent and sheltered woman has never experienced romance before, but her newfound determination to win the guy over is moving.

Sadly, the rest of the film hardly measures up to Wiig's fine performance.

Bizarre and unrealistic story aside - adapted from Alice Munro's 2001 short story Hateship, Friendship, Courtship, Loveship, Marriage - the pacing is so terribly slow that several impatient moviegoers walked out, midway through the screening this reviewer attended.

The supporting characters, from Steinfeld's bratty teenager Sabitha to Nolte's stern grandfather, are also too one-dimensional to amount to anything interesting.

Worse, many sub-plots are left unresolved.

The movie acts really only as a showcase for Wiig's immense talent and a sign of some potentially great things to come from her.