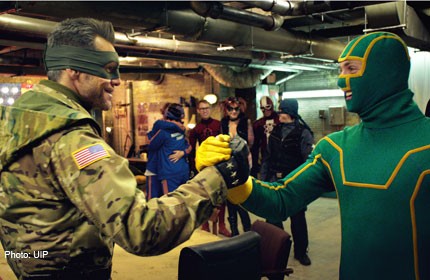 The thing I appreciate about Kick-Ass 2 is all the violence and swearing.

I love family-oriented superhero movies such as The Avengers - who doesn't? - but sometimes it's nice to see guys and gals in silly costumes go nuts.

Frankly speaking, this is how they should make Wolverine flicks: wall-to-wall nastiness.

The story is about how Kick-Ass (Aaron Taylor-Johnson) joins a new team of makeshift supers led by Colonel Stars And Stripes (Jim Carrey).

Meanwhile, the beloved Hit-Girl (Chloe Grace Moretz) is just trying to fit in at school.

The story is a bit wishy-washy, but the action isn't. I particularly enjoyed seeing Hit-Girl attack a van full of armed men, and stab a mean lady with broken glass.