Movie review: Night at the Museum: Three's a crowd 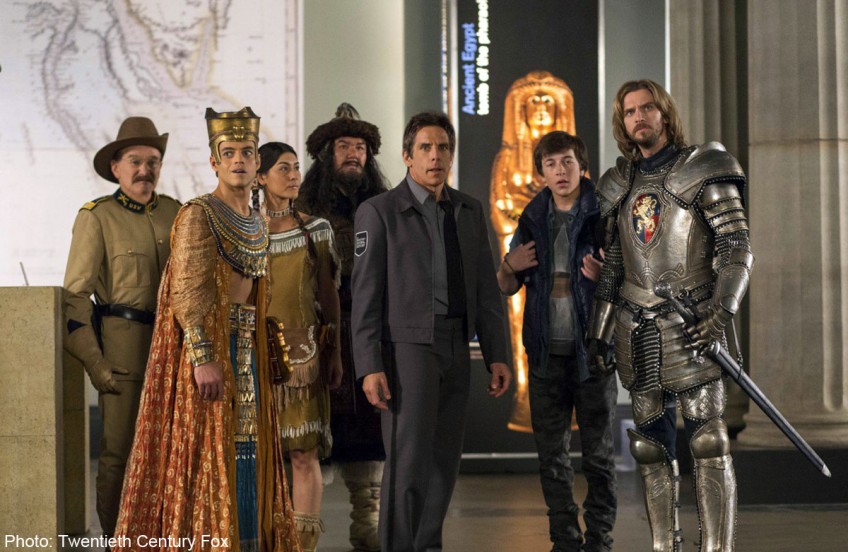 Cinema Still : Night At The Museum: Secret Of The Tomb

It's a regular day in London: chilly, gloomy, wet. And for Ben Stiller, it seems all too familiar.

"When we were filming, it rained every single day," he says, followed with an eye roll and a smile.

The 49-year-old actor is back in the city where his latest film, "Night at the Museum: Secret of the Tomb," was shot. The whole gang has returned, too: director Shawn Levy and actors Owen Wilson, Sir Ben Kingsley, Rebel Wilson and Dan Stevens.

The third and final instalment of the action-adventure series, about museum displays on a stroll, sees Stiller's Larry Daley character traveling to the British Museum to repair the magical Egyptian tablet that enables the exhibits to come to life at night.

Those who've come for the pounding sound and CGI spectacle won't be disappointed-and Levy is wise to focus the story less on the wild creatures and more on the historical characters, including favorites Theodore Roosevelt (Robin Williams), Jedadiah (Owen Wilson) and Octavius (Steve Coogan).

Joining the cast are Kingsley (as Merenkahre the pharaoh), Stevens (in a scene-stealing turn as Sir Lancelot), and the sensational Rebel Wilson, as Tilly the museum night guard.

"Coming to it fresh, you are invited to join a very confident group who are joyful about what they're doing," says Kingsley. "They're very comfortable in their own skin, in their own words."

Which may be the reason the cast members seem cozy with each other throughout our conversation, throwing quips and exchanging giggles.

"A lot of people don't know that we're related, but clearly we're both blonde," Rebel says of Owen. "And my dad has taught me a lot about comedy. Unfortunately he cast me out of the Australian wilderness when I was only a baby, but I have forgiven him."

The film was fun to shoot, the cast says, and it shows in the final product, a fuzzy and fitting farewell to the franchise. While "Night at the Museum's" ingenious concept isn't as fascinating as when the first movie was released in 2006, it still manages to surprise, thanks to the new character Laaa, Larry's Neanderthal doppelganger, played with amusing physicality by Stiller himself. And look out for a cameo by a massive A-lister, whose self-parody will bring in a few laughs.

Welcome back to London. What was it like shooting here?

Shawn Levy: We realised after the second film that we had never really gone beyond the museum walls. So this central idea of the magic spilling out of the museum and these characters colliding with the real world-that was very fun to do in Trafalgar Square, the West End and various places. And then the British Museum was amazing; we actually filmed more inside it than we've ever filmed in any other museum in the whole series. That gives the movie a certain reality that would never be quite the same if they were all done in digital.

Kids love the franchise. What kind of feedback have you received from your own children?

Ben Stiller: You know, my kids don't really watch the movies I'm in, but they like these types. The thing is, with kids, when you're making movies, you're a parent first, and that's how they see you. And we have to go on location for these movies, which is not always fun when you're not with your kids the whole time. So at least it helps a little bit that they know I'm making one of these movies, that we can talk about it and they can actually relate to what I'm doing. It was fun doing the premiere with them in New York, and they gave the seal of approval.

Do you get recognised for your characters by the younger fans?

Owen Wilson: I get recognised for Jedediah but I feel like I get more questions for the monkey than about me or Steve (Coogan). And I know that when my son visited the set, that seemed to be what he was most excited about-to see Dexter.

Ben S.: I get a lot of parents who will recognise me and then they'll shake their kids and go, "Look! Look! You know who that is?" And the kids will just stare at me.

Owen: They'll say their kid wants a picture but it's really them who want it.

Rebel, how did you develop your hilarious character?

Rebel: I guarded a museum for 18 months. I spoke a lot to Daniel Day-Lewis and he said if I wanted to win an Oscar, that's what I had to do. My friend, the great British comedian Matt Lucas, I tried to channel him a little bit, a bit cheeky. I like being strict as well, because that's how I like to roll, like a gangsta. I never thought I'd ever be doing my own aerial stunts, which I did in this movie, and a lot in "Pitch Perfect 2."

Shawn: Rebel is one of the funniest actors around. She saw an opportunity to come in and just murder it.

Sir Ben, what's it like becoming a part of these films and working with these guys?

Ben Kingsley: The welcome was extraordinary. You hit the ground running and you never feel you're being tested, particularly by Shawn. Shawn is a director who gives you a role and you never, ever feel again that you're auditioning. With some directors you feel you're auditioning every day-it's a very uncomfortable feeling. This was a very buoyant set to be on. But it was never complacent, because you can't be complacent with comedy.

Ben S.: It was very exciting for us to welcome Sir Ben into the cast; it just changed the energy. All the new cast members really changed the energy-Rebel and Dan-people coming in from their own points of view. That keeps the franchise alive, that keeps it fresh.

Dan, was it refreshing to exercise your comedic skills in this movie?

Dan Stevens: Yeah, it was really nice to do some comedy. I haven't done any since I was in college doing stand-up. I sort of followed a straight-laced path since then, with serious roles and costume drama, so it was delightful to get to work with these guys, these world-class improvisers, and to learn that art as we moved along was amazing.

It was likely an emotional movie to make because it was the end of Larry's journey. Then after the film was completed, Robin Williams passed away.

Ben S.: I never took it for granted, being able to work with Robin, because I was always a huge fan of his. Growing up, he was one of my comedic idols, and this was my only chance to work with him. And he was very generous and kind and would make everybody feel as if they were an equal. It was fun to be around him, but in reality, under the surface I was always a fan.

The franchise has done more than entertain. It's increased visitor numbers at the Museum of National History and the Smithsonian Institution. Now it's set to do the same for the British Museum.

Dan: Since the first movie, museums have started having sleepovers in museums and that's become a thing, to actually spend the night in a museum. I think the films have encouraged a fun, silly engagement with history. They really feed into how you're supposed to go around museums, which is with an active imagination. You look at these inanimate objects in glass cases and you view them with a crazy narrative. My kids go around the natural history museums now and imagine stories behind every dinosaur and artifact.

Ben S.: I have a lot of people-adults-who tell me, "I had a sleepover at the museum with my kids." And I'll say, "Great. Did anything come to life?"

This is the end of the franchise, but any chance we're getting a spin-off?

Shawn: I suppose we can't predict the future, but we definitely have come to love Tilly the night guard, so we shall see.