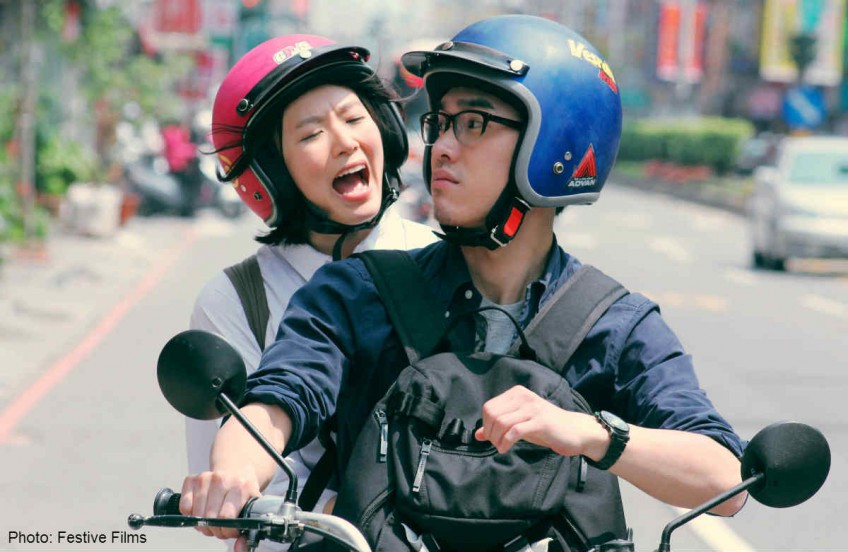 Perfect casting: Chang Shu-hao is the Taiwanese civil servant who is baffled by the girl from Beijing, played by Huang Lu.

The story: Taiwanese civil servant A-cheng (Chang Shu-hao) is assigned to write a guide that deals with Taiwan-China cross-cultural etiquette and customs, except that he has never been to China and knows nothing about the subject. Beijing girl Qin Lang (Huang Lu) is in Taiwan in search of her grandmother's long-lost first love, but does not know where to start. The two decide to help each other, but they must first get past their own cultural differences.

Nothing is easy about Taiwan and China cross-strait relations, so it is refreshing to see a film that tackles the thorny issue with such a light hand.

Rather than have his two leads get all hot and bothered in serious political debates, first-time feature film-maker and Taiwan native Hsieh Chun-yi chooses to have them engage in snappy - and often very funny - banter with each other to showcase their cultural differences.

Every scene makes a case for their many contrasts - from the way they resolve conflicts (Beijing girl Qin Lang is brash while Taiwanese boy A-cheng is mild), to the specific terms they use to order dumplings at a restaurant (she orders them in ounces while he gets them by individual pieces). She never understands him when he sprouts Minnan words and he is forever puzzled by her Beijing slang.

In one of the funniest scenes, she belts out a Chinese Communist Party anthem in front of everyone at Taipei's Chiang Kai-shek Memorial Hall, much to his horror.

Although much of the characterisation is stereotyped, writer-director Hsieh never casts judgment - he simply presents the humour in the situation, that both are ethnically Chinese and yet each speaks and thinks so differently from the other.

Neither does he offer any hard and fast solution to the cross-strait debate, even if his cheery film hints that Taiwan and China can come to some form of agreement if they simply look beyond false assumptions.

What is absolutely right here is the casting of the two leads - Taiwanese actor Chang of Gf*Bf (2012) fame and Chinese indie film darling Huang (She, A Chinese, 2009). Both are utterly charming in their roles, and their blossoming friendship is believable, after starting out on the wrong foot at first.

The feisty Huang's often aggressive and bitter behaviour is softened by the explanation that she became that way only after being burnt by a former relationship.

Chang, meanwhile, is the endearing civil servant who discovers that there are times when even he is unable to sweet-talk his way out of certain situations they get embroiled in.

Only in the final third of the film does the jaunty pacing hit a wall and the film feels a little tiresome as it veers towards melodrama. Safe and mild it may be, but it is also completely entertaining.