Movie review: We are what we are 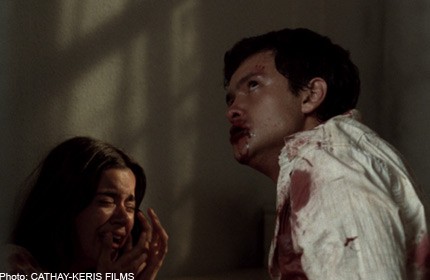 Cinema still: We Are What We Are

The story: The death of a nondescript middle-aged man on the street starts a chain of events for his family. They fly into a panic: What will they do, given that he is the hunter who brings home humans for their cannibalistic rituals?

This film has generated much buzz on the festival circuit and an American arthouse remake is on the way.

That tells you about as much as you need to know: This is not quite a horror movie in the traditional sense. Nothing much happens until the final third, when all hell breaks loose. The setup is slow and sombre. Bits of background emerge at a leisurely pace.

In their small, cluttered and shabby Mexico City apartment, family members mutter ominously about a sacred ritual and how it should never be allowed to stop. They bicker constantly about whose job it is and who should take responsibility.

They might be talking about doing the dishes or taking care of an ageing parent, but it becomes clear they are talking about snaring their fellow citizens and taking them indoors for a butchering on the kitchen table.

This is a story about family culture, a topic much beloved of arthouse cinema. The home can be a hothouse where some rather bizarre flowers bloom.

The two sons and daughters are well adapted for life within the confines of the apartment; but outside, they are a mess, constantly misreading social cues, either by under-reacting or over-reacting. Only their dead father could navigate both worlds.

In its ideas about child social alienation as a result of suffocating parenting, there are parallels to the Swedish vampire film Let The Right One In (2008).

But this film lacks the supernatural overtones of the earlier work. There are hints that, as happens in many families, the brood's internal values and beliefs are just a means of keeping everyone trapped and under control.

Overlaid on this kernel of introspection is a satire of life in Mexico City. The cops are so corrupt that even when there is overwhelmingly evidence of a cult of cannibalism, they are not interested.

"People in this city eat each other all the time," one of them says. The policemen get involved only when there is promise of money and fame and meanwhile, the metropolis' tribes of homeless people and prostitutes provide easy pickings for predators - up to a point.

Writer-director Jorge Michel Grau does not make them completely helpless. The dispossessed are capable of meting out their own justice. They show that in a city where cannibalism is a fact of life - both in a literal and metaphorical sense - the sheep need to make a stand now and again.