The Video Music Awards, generally watched more for pop culture moments than for news of the winners, also gave Taylor Swift a platform to show off a new, darker image as she premiered her new video.

Pop superstar Katy Perry, the host of the gala, floated onto the stage in Los Angeles in a spacesuit reminiscent of the awards' "Moonman" statuette - rechristened "Moon Person" as part of a gender-neutral drive this year.

MTV merged its male and female categories for the awards and invited a number of transgender US servicepeople to watch the show - two days after Trump ordered a ban on new transgender recruits in the military.

Perry, one of the most vocal celebrity campaigners for defeated candidate Hillary Clinton, took aim at Trump as she urged fans to choose a winner in a category that remained open to online voting.

"This is one election where the popular vote actually matters," Perry quipped.

"But hurry up before some random Russian pop star wins."

Paris Jackson, a model and the daughter of the late "King of Pop" Michael Jackson, took aim at the white supremacists who marched on August 12 in Charlottesville, Virginia.

"We must show these Nazis," she said, "that we have zero tolerance for their violence and hatred."

The mother of Heather Heyer, a 32-year-old woman killed when a white supremacist supporter ran his car into counter-protesters, was set to appear later at the VMAs.

She was to present "Best Fight Against the System," a new award that recognises activism in music.

With Texas being whipped by massive storm Harvey, the gala also sent best wishes to residents in harm's way. Perry asked viewers to consider donations to the American Red Cross.

Rapper Kendrick Lamar was leading the evening with eight nominations amid acclaim for his latest album "DAMN."

He opened the gala with a fiery rendition of his track "HUMBLE."

Showing his new fascination with martial arts, two ninjas appeared to chase him across the floor in Los Angeles.

By the end of the song, a man was ablaze and the dancers were climbing a fence that was full of fire.

Swift used the occasion to unveil the video for her latest song, "Look What You Made Me Do," in which she showed a new dark, bad-girl image. 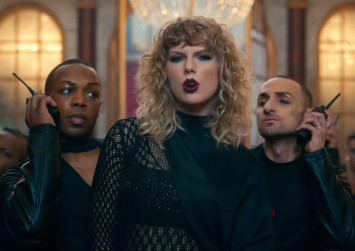 The camera opens with imagery of a cemetery and a gave that says "Here Lies Taylor Swift's Reputation" - a theme that will apparently weigh heavily on Swift's newly announced album, which is entitled "Reputation" and comes out on November 10.

The video proceeds to show Swift in Halloween-like makeup and then crashing a car, with paparazzi quickly appearing to show her mishap to the world.

The 27-year-old singer, usually known for her squeaky-clean image, appears in the video smashing up a store with a baseball bat and riding on top of a motorcycle in a spiked leather jacket.

When Swift released the song, fans immediately speculated that she was taking aim at the rapper Kanye West.

He outraged Swift with a song last year in which he boasted that he may be able to get her to bed because "I made that b**** famous" - an apparent reference to how he interrupted her acceptance speech at the MTV Video Music Awards in 2009.

Swift reinforced the fans' theory on the song's meaning by ending the video saying she would "very much like to be excluded from this narrative" - a turn of phrase that she previously used to describe the feud with West.

Jared Leto of Thirty Seconds to Mars offered a tribute to two rock singers who committed suicide this year - Chester Bennington of Linkin Park and Chris Cornell of Soundgarden.

And young New Zealand pop star Lorde showed her quirkiness as she pranced ballet-style to her music across the floor after she said she was suffering from the flu.