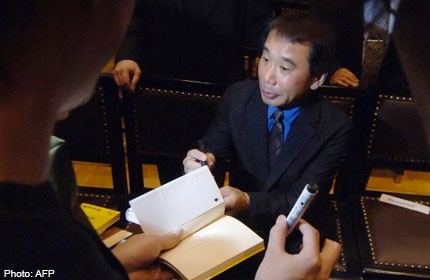 STOCKHOLM - With just hours to go before the announcement of this year's winner of the Nobel Prize for Literature, most bets were still on Japanese novelist Haruki Murakami.

Alice Munro of Canada and Belarussian Svetlana Alexievich were also given a fair chance of winning a prize that has historically been awarded to literary icons ranging from Rudyard Kipling to Ernest Hemingway and Albert Camus.

But nothing else will be known about the identity of the winner before it is announced Thursday at 1100 GMT, inside the historic halls of the Bourse building in central Stockholm.

Murakami, known across the globe for works such as "Norwegian Wood", "Kafka on the Shore" and "1Q84", tops the list at bookmaker Ladbrokes with 5/2 odds.

Also high on Ladbrokes' list of favourites is Canadian Alice Munro with odds of 4/1, and Belarussian Svetlana Alexievich with 6/1 odds.

If Murakami wins the laurels, it will be a choice that will delight millions of readers.

The 64-year-old has attracted an avid following with his intricately-crafted tales of the absurdity and loneliness of modern life, which are peppered with references to pop culture.

Munro, meanwhile, is a writer of short stories, a genre that has only rarely been recognised by the Nobel committee, and Alexievich is known for writing first-person witness accounts of exquisite quality.

Exactly what deliberations are behind the final pick will not be known for another 50 years, the period during which the academy's records are kept confidential.

Despite this, or perhaps because of this, immense interest surrounds the logic guiding the academy as it selects the writer whose name will forever be associated with the world's most coveted literary prize.

"For the past 15 years, the Academy has... explored questions of literary quality, the evolution of literature, and its place in a historical context.

"For them, it's less important if the laureate is well known or not."

"I believe very firmly that it's going to be a woman this year," said Bjoern Wiman, editor of the culture pages at Swedish daily Dagens Nyheter. But he admitted that he has only once made an accurate prediction.

Just 12 women have received the Nobel Prize for Literature since the award was introduced in 1901.

For Swedish publisher Svante Weyler, Alexievich - the darling of Stockholm literary circles - would be "a perfect choice" for the prize, given that she is politically engaged but still palatable to western tastes.

But, he added: "The Academy takes some pleasure in surprising people and acts in a slightly irrational manner."

Other names floated for the honour include American novelists Thomas Pynchon, Philip Roth and Don DeLillo.

Or the prize could go to poets like South Korea's Ko Un, Syria's Adonis, or Kenyan Ngugi wa Thiong'o.

The names of Albania's Ismail Kadare, Jon Fosse of Norway and Dutch writer Cees Nooteboom have also popped up as bookies and literary editors everywhere try to guess who will scoop the Nobel.

The Swedish Academy, however, is known for its spy-novel tactics aimed at avoiding leakages, such as using code names for authors and fake covers for books read in public by the jurors.

According to publisher Weyler, the only thing that is not in doubt is the advanced age of the winner.

"In literature, you are rarely very good until you get old," he joked.

"It's not like mathematics where you make all the discoveries before the age of 25."

All past winners of the literature prize put together, the average age for receiving the ultimate accolade is 64.