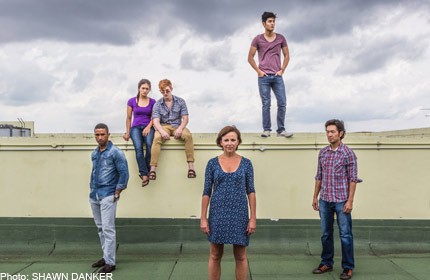 SINGAPORE - Plastered all over one wall in the Pangdemonium rehearsal studio are pages and pages of American actor Juan Jackson's research on the various types of medication for bipolar disorder, in tiny black print.

Jackson, 41, who is playing a psychiatrist in the upcoming musical Next To Normal, shakes his head.

"Each person's experience is so different, his chemical make-up is different, and if it's a balance between his biology and experience - that's a big question," he says.

He was previously seen on the Singapore stage as a very different kind of doctor: the flamboyant Dr Frank N Furter of the Rocky Horror Show (2010).

The Pulitzer Prize-winning Next To Normal will run at the Drama Centre Theatre from Sept 5 to 22, and it revolves around a woman, Diana, struggling with bipolar disorder and schizophrenic hallucinations, and how it affects those around her - especially her family.

Singapore actor Adrian Pang, 47, who plays Diana's long-suffering husband Dan, says of the disorder: "It's so misunderstood. There are so many misconceptions about what it is. I daresay that even the medical profession is still struggling to get a handle on it, exactly what it is and how to treat it."

West End star Sally Ann Triplett, 51, will be taking on the challenging role of Diana.

The sought-after British actress, who has tackled meaty roles from Roxie Hart in Chicago to Grizabella in Cats, will perform in Singapore for the first time.

Triplett, who has a son and daughter, cannot quite imagine being dependent on them: "I can't get my head around that one yet. It feels very alien to me.

"It's all about the story for me. You want things to move you, you want to be taken somewhere that you haven't been taken. I haven't felt like this for a long while. I've done things I know. But I haven't done a thing like this."

As part of their intensive research for the production to make sure their portrayals are as accurate as possible, the cast and director Tracie Pang met several doctors and patients from the Institute of Mental Health, as well as a caregiver who has been looking after her mother for many years.

Jackson says: "They contradicted what most people would think about them. They can see the humour in it."They were laughing about some of the crazy things that were happening in their lives, while also being completely dead-on about some of the tragedy."

This sense of humour and lightheartedness has its moments in the script, and the team is hoping to reduce the stigma of mental disorders and the negative ways in which they are perceived.

Director Pang, 44, says: "There's often that feeling of 'You can will yourself to be better'. Just willpower. It's completely out of their control, but everyone around them thinks, you just need to go for anger management. It's a shame that this needs to be hidden."

The musical is a layered one, and the cast understand that the material might sound intimidating or heavy-going to a theatregoer.

Pang says of this: "A musical doesn't have to be a 'feel-good' musical for people to be able to enjoy it and appreciate it."

He adds: "It's ostensibly about mental health, but it's also about family. And it's about anyone - everyone's a father or a son or a daughter or a mother. It's about people you care about." Where: Drama Centre Theatre, National Library Building Level 3

Info: Recommended for 16 years old and above (some mature content and coarse language)