The naked truth about Asians in Hollywood 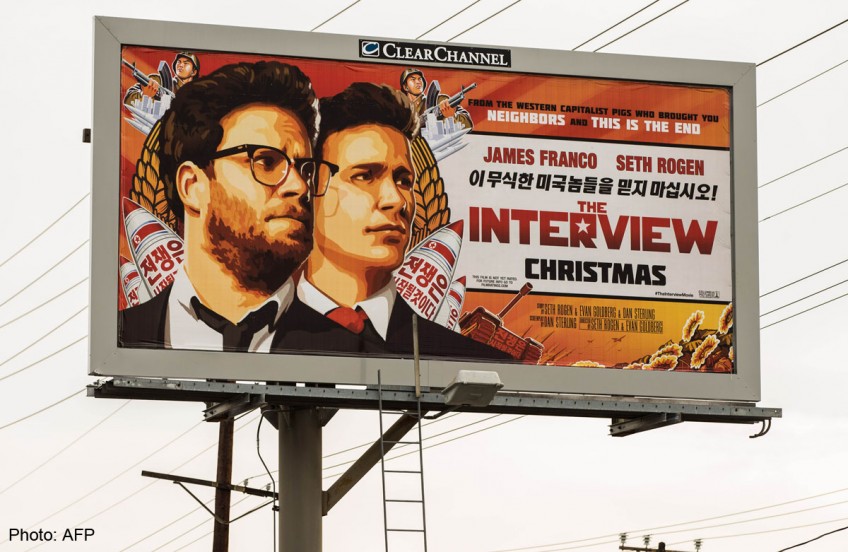 "Unfair!" the millionaires of Hollywood shrieked last week. You could practically hear the ice in their kale-chia seed detox smoothies rattle, they were so agitated.

While an army of unpaid interns and assistants scrambled to book extra appointments at holistic centres around Los Angeles to soothe their bosses' frayed nerves, a new truth slowly dawned.

It seems that some foreigners get a bit ticked off when you turn the assassination of their most senior leader into a joke. Who knew?

Come on. What's not funny about the murder of the leader of a country far, far away and many times smaller than yours? Especially when that country is small, goofy and Asian?

It's as if these faraway Asian types are real people, with real feelings, and are actually proud of their nations, even when that nation is nowhere as awesome as the US of A.

In Hollywood, weird Asians, with their weird faces, customs and accents, are hilarious (that is, the nice ones are funny. The not-nice ones are sinister.

Unless they are women, then they are so hot, especially if they are sinister). Tune in to the hit sitcom 2 Broke Girls, or any one of the Hangover movies, or the more recent thriller Lucy for a refresher.

Add to that stew of stereotypes a madcap plot to kill that silly Asian head of state with the nerd haircut, and you get comedy gold.

This is the basis of the movie The Interview, the Seth Rogen-James Franco movie from Sony Pictures that sparked the hacking attack, allegedly at the command of North Korea.

For some unfathomable reason, the North Korean state did not feel the slightest bit honoured by the ribbing they got about the gory death of their supreme leader at the hands of two of Hollywood's biggest stars.

The hackers threatened more action if The Interview were screened.

So the world was treated to actor George Clooney stepping up to denounce Sony's cowardice and thunder at North Korea for its suppression of American free speech.

Perhaps Clooney should have qualified "free speech" as "Hollywood's freedom to make and release any movie it likes - as long as the movie only mocks countries that studio bosses have allowed because they don't have financial interests in that country".

Three years ago, for example, in the movie Red Dawn, the villains invading the United States were digitally swopped from China to - guess where? - North Korea, for the sake of the Chinese box office.

Through the hacking of Sony Pictures's e-mail, the world's worst kept secret was also revealed - that Tinseltown executives are racist.

To be more specific, they are race realists. In a leaked e-mail, uber-producer Aaron Sorkin argued against the making of a biopic about a successful Japanese-Canadian trader, because no movie featuring an Asian lead actor would ever make money.

All this is coming from liberal, left-leaning Sorkin, so you can imagine what the executives to his political right think.

His logic lays bare why, in the Bible epic about the story of Moses, Exodus: Gods And Kings, Christian Bale and Joel Edgerton play people of North African and Mediterranean extraction.

And why in the remake of the Japanese anime classic Akira, all roles will be taken by white people.

I suspect that most people in Singapore will not care about this issue, and many - including me - will agree with him. Money talks in LA, and being fair walks.

All the world sees is a lopsided image of Asia and Asians, starting from decades ago, and continuing into the future. White is the default colour, even when it is inappropriate.

That has an effect on Singapore's own movie industry - can we really see a glamorous romantic couple on screen, both Asian, speaking English? Would that make sense to us?

Or would it feel weird because of how our brains have been programmed by Hollywood?

Reading the bios of Asian actors in America can be heartbreaking.

In a show I enjoyed greatly, the period HBO drama about pioneering doctors The Knick, set in early 20th-century New York, a fair amount of time is spent in a Chinatown - in a brothel, naturally.

In there, Taiwanese-American actress Lin Pei Pei says a few lines and shows a lot of skin. For that, she trained in two different drama academies.

A faint glimmer of hope came last year when the Netflix series Marco Polo came to Malaysia to shoot. Local actors perked up, hoping to get parts in what was promised to be a modern and fair take on Asian history.

But as one local actor told me, his feelings changed when he read the casting sheet: "Two Chinese males, ages 20-30. Fifteen Chinese women, any age, must be willing to work nude."

This article was first published on December 21, 2014.
Get a copy of The Straits Times or go to straitstimes.com for more stories.