An asteroid collision with an orbiting space station leaves a handful of children stranded in space in Mitsuo Iso's new animated work, The Orbital Children. While it is scheduled for a cinema release in Japan in two feature-length instalments, Netflix has staged a simultaneous streaming release, dividing the saga into six half-hour episodes, all of which are now available on its platform.

Set in the year 2045, The Orbital Children follows a trio of youngsters as they arrive at Anshin, a state-of-the-art space hotel, constructed by Japan and now operated by the US company Deegle and their in-house AI system, Twelve.

Fourteen-year-old 'white-hat hacker' Taiyo, the similarly aged 'SkyTuber' Mina, as well as her younger brother Hiroshi, are the winners of Deegle's Youth Space Experience Promotion, and will spend their time aboard the space station — the first designed specifically to cater to children — with Touya and Konoha, the last surviving moon children.

Born on a now-defunct moon colony, Touya and Konoha are fitted with electronic implants designed to help them adapt to the Earth's gravity. Unfortunately, the implants were designed by an earlier AI system known as Seven, which was destroyed in an event referred to as the Lunatic Seven Incident.

The moon children's health is carefully monitored by their on-board nurse, Nasa Houston, and they are cared for by Touya's uncle, Sagamai, the mayor of Anshin.

The youngsters arrive just as the Anshin is bombarded by a crippling comet storm, which leaves the survivors fending for themselves, Lord of the Flies-style, until communications and power can be restored. Similarly, the show's writer-director Iso unloads an overwhelming amount of information on his viewers within the show's opening episode. 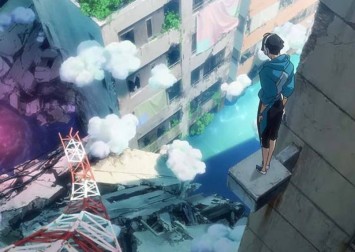 From the elaborate origins of his characters, to the existence of an interfering terrorist organisation known as John Doe, Iso also introduces an array of speculative technology, including personal interactive drones that shadow characters wherever they go, and smartphones fitted, quite literally, in the palm of your hand.

The result is an incredibly disorienting viewing experience, which shifts between rapid-fire sequences of detailed exposition to lengthy periods in which very little appears to happen.

While each of his characters is easy enough to differentiate from the others, none of them experience much of an emotional or developmental arc over the course of the series. They simply journey through their interstellar ordeal reacting to various technology-related ordeals, interspersed with the kind of broad-stroke pseudo-philosophical musings that perpetuate so much sci-fi anime.

Iso's experience in the world of animation is hugely impressive. Stretching back to the 1980s, he has worked as a key animator on such top-tier titles as Mobile Suit Gundam, Neon Genesis Evangelion and FLCL, as well as films Only Yesterday and Porco Rosso for Studio Ghibli, Mamoru Oshii's Ghost in the Shell and even Quentin Tarantino's Kill Bill Volume 1.

Despite his heavyweight resume, Iso has previously only written and directed one other series, 2007's similarly techno-infused Dennou Coil. This lack of storytelling experience is sadly telling in The Orbital Children.

Iso's themes of adolescent alienation, over-reliance on technology, and the desire to escape smothering adults and immerse oneself in life's wealth of diversity are earnestly expressed, yet relatively simplistic and obvious.

The animation is undeniably beautiful and detailed, including everything from delightful visual gags to dizzying astral space-scapes, but too often we are distracted from enjoying the visuals by the overwrought technobabble and grandiose existential musings, paired with a sluggish and uninvolving adventure narrative.

Being trapped in space with a shuttle-full of overstimulated children would be an unappealing and torturous proposition at the best of times, but The Orbital Children also manages to make it dull.

The Orbital Children is streaming on Netflix.