Song Joong-ki in the K-drama Vincenzo.

Haiva Nurani couldn’t quite believe her eyes when she spotted her favourite brand of Indonesian coffee confectionery in an episode of hit South Korean television series Vincenzo.

The 22-year-old college student from Bandung, Indonesia, has been a fan of K-drama since high school, but said she had never seen her own culture represented in one of the shows. The “unreal” experience “surprised me and made me proud”, she said.

“I think Kopiko’s decision to invest in product placement in the drama was a smart move to expand to the global market since South Korea also has a big coffee culture,” Nurani said.

Vincenzo, which aired its final episode this month, stars 35-year-old Korean wave – or hallyu – actor Song Joong-ki in a dark role as an Italian mafia lawyer. It has since become one of the highest-rated drama series in Korean cable television history.

I’m legit screaming out loud because they’re advertising kopiko again on vincenzo ep 15 and also kopi luwak??????? it’s a great time to be indonesian. these kdramas know how to appeal to their biggest fans

Stills from the show featuring Kopiko and kopi luwak, a coffee produced in both Indonesia and the Philippines from beans that have been partially digested by Asian palm civets, have been widely shared by social media users in both countries.

“I immediately searched online to buy a Kopiko blister pack after watching the show,” said Pikx So, a 20-year-old creative content writer in the Philippine region of Calabarzon.

This isn’t the first time that So has been inspired to try the products that have appeared in her favourite Korean dramas, either. She said she bought some tteokbokki (spicy rice cakes) and roasted sweet potato from a local Korean grocery store after seeing them in a show once, and also tried soju for the first time after watching the characters in Vincenzo drink the alcoholic beverage in multiple scenes.

“I think people want to get to know these foods that appear in K-dramas because food is a really big part of the Korean culture,” she said. “It’s also the same here in the Philippines, so people here have an extra reason to try them out.”

The controversial Chinese bibimbap scene in the tvN drama #Vincenzo has been entirely deleted by streaming sites such as TVING and Netflix.

Product placements – or PPLs as they are referred to in South Korea – have become a staple of Korean dramas, with foreign brands increasingly looking to get their products featured in some of the country’s biggest shows. This can stir controversy, however, as happened when Song’s character in Vincenzo was shown eating a Chinese version of popular Korean rice dish bibimbap.

The backlash over Zihaiguo-brand bibimbap appearing in the show was so great that the scene featuring it has now been removed from all online streaming platforms.

Song also issued a public apology last week in response to the controversy, which follows in the wake of much heated debate online over the origins of kimchi, hanbok and other elements of Korean culture that some have claimed originated in China – sparking accusations of cultural appropriation.

Read Also
K-drama Vincenzo look back: Is Geumga Plaza real, which Korean celebs made a cameo? 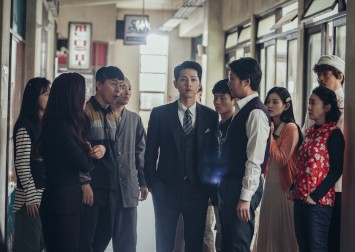 “As an actor in a title role, I think it is right to apologise to those who are disappointed with our programme,” Song told reporters on Monday. “After that controversy, we focused more on improving the quality of our show.”

Seo Kyoung-duk, a professor of cultural education at Sungshin Women’s University, took to Instagram to express his concerns over the controversy.

“The most concerning part about the entire situation is the fact that the packaged bibimbap has Chinese words written on it,” wrote the professor, who has previously appeared on popular television shows to comment on Korean culture. “I worry that this may cause overseas viewers to believe that bibimbap is a Chinese cuisine.”

Seo need not worry too much, however, if the experiences of Filipino writer So are anything to go by.

“After the K-drama boom in our country around the start of the 2010s, there’s always one or two Korean dramas dubbed in Filipino on local television,” So said. “Countless Korean restaurants and Korean grocery stores popped up out of nowhere.”