Lee Jae-wook as lead character Jang Uk in a still from Alchemy of Souls on Netflix, the latest Korean drama series from writers Hong Jung-eun and Hong Mi-ra.

New fantasy period drama Alchemy of Souls from Korean broadcaster tvN, streaming worldwide on Netflix, is set in a world filled with mages and "soul shifters". A kaleidoscopic array of spells is rendered on screen through visual effects.

Building from scratch a whole fantasy lore which melds modern sensibilities with traditional design, the show gleefully sidesteps cultural veracity and historical authenticity — you only have to look at the loudly patterned costumes and shocks of blond hair.

This is the latest series from writers Hong Jung-eun and Hong Mi-ra, known as the Hong Sisters, who have penned several romantic comedies, from Sassy Girl Chun-hyang all the way to their most recent show, Hotel del Luna with Lee Ji-eun (aka IU) and Yeo Jin-goo.

Alchemy of Souls is far from their first brush with fantasy, but it represents their boldest mash of genres yet, with the tone constantly switching between period drama, action, romance and comedy.

While this is a romantic comedy at heart, with so many characters and so much exposition to get through as they set up their fantasy world it takes a while before they remind us of that.

Jung So-min (Monthly Magazine Home), Lee Jae-wook (Do Do Sol Sol La La Sol) and Minhyun (formerly of K-pop boy band Nu'est) take on the main roles in this fate-fuelled fantasy, with Arin (a member of K-pop girl group Oh My Girl) and Yoo In-soo (All of Us Are Dead) among the other names in the generally young cast.

Read Also
K-dramas in June 2022 you have to watch 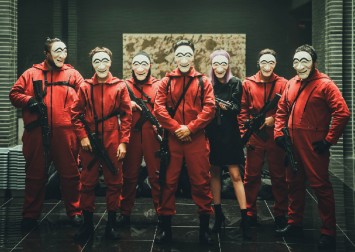 The series begins with a woman trying to protect children from a soul shifter, a demon that can change bodies but takes on a stony appearance when it is exposed.

A mage, Jang Gang (Joo Sang-wook), appears and saves the commoners before consigning the creature to the bottom of the sea.

Jang is the chief mage to the ailing king and has developed a spell known as the "alchemy of souls", which allows souls to switch bodies.

The king imperiously requests that they switch their souls for a week, and his first act is to rape and impregnate Jang's wife.

Twenty years later, a group of mages have cornered the mage-killing "Shadow Assassin" Nak-su (Go Yoon-jung) on a frozen lake; after a hard-fought battle, she barely escapes with her life.

Nak-su slips into a tavern and begins the alchemy of souls spell on a woman there, but mistakenly transfers her soul into that of the blind Mu-deok (Jung So-min) instead.

As Mu-deok, Nak-su is able to see, but her injuries and the weak body she finds herself in strip her of her magical powers.

Mu-deok is sold to a brothel, where she learns about the so-called Four Seasons of Daeho — the powerful Jin, Park, Seo and Jang mage families — who were responsible for the death of her family.

A younger generation of Four Seasons are developing their powers at a training centre, including Jin Cho-yeon (Arin), Park Dang-gu (Yoo In-soo) and Seo Yool (Minhyun).

Meanwhile, Jang's son Jang Uk (Lee Jae-wook) had his energy gate sealed by his father as a baby and has never been able to cast a spell.

He soon figures out who she is, owing to her striking blue-tinged eyes, but rather than expose her, he strikes a deal with her: he will help her regain her powers and escape if she helps him open his energy gate.

The show appears to position itself at a far remove from the typical Korean period historical drama.

Early in the opening episode, a narrator clues us in that the story we are about to witness takes place in the kingdom of Daeho, a magical land that cannot be found on maps or in history books.

It seems impossible that anyone would confuse this kingdom with the Joseon kingdom that dominated the Korean peninsula for five centuries, but one can't be too careful when it comes to Korean dramas these days, where anything with so much as a whiff of a historical reference is subjected to intense online scrutiny.

Another Korean drama series, Joseon Exorcist, had zombies in it but was still cancelled in its first week when it fell foul of cultural gatekeepers. Snowdrop almost suffered the same fate late last year.

The scattered elements of Alchemy of Souls give it a frazzled, but energetic and colourful identity that carries it from one set piece to the next.

The story doesn't always make perfect sense, but the overall direction of the narrative is never less than clear.

However, there is the occasional eyebrow-raising moral lapse. Nak-su is very much the prototypically cute and feisty Korean romcom lead, but her transformation into Mu-deok only happens because she essentially murders an innocent and blind young woman.

Such quibbles aside, the first week of episodes positions Alchemy of Souls as a vibrant drama. With so many side characters that have barely been fleshed out, there are a lot of places for the show to take us in the weeks to come.

Alchemy of Souls is streaming on Netflix.