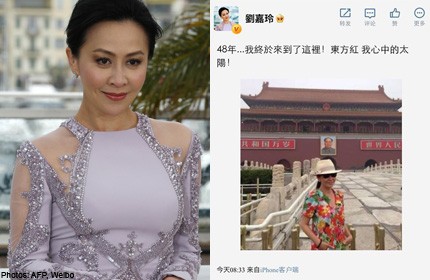 HONG KONG - When Hong Kong actress Carina Lau visited Beijing last month, she did what many tourists do: uploaded online a photo of herself at Tiananmen Square.

But the reaction was hardly run-of-the-mill.

Her post on Chinese social media Sina Weibo attracted 40,000 comments, was reposted 30,000 times, and sparked a war of words.

The trigger was her controversial message. "48 years… I am finally here! The East is red, the sun is in my heart," wrote the 48-year-old, in apparent allusion to the Chinese Communist Party song that idealises Mao Zedong as China's sun.

Passionate words but they left some fans cold even as ensuing debate on Lau's page veered into the relative merits of the Chinese and American political systems.

"Such an ass-kisser! I've always treated you as my idol!" cried one netizen.

Another wrote: "Sigh! Hong Kongers are becoming 'red'. A lot of people died in Tiananmen Square in 1989!"

This was not the first political brouhaha that a Hong Kong celebrity has got embroiled in in recent weeks.

"Over half the population in China do not read the traditional Chinese script. Sigh. The ancient Chinese civilisation is dead," wrote the 51-year-old, who most recently starred in the titular role of Ip Man: The Final Fight.

His comment on a politically charged issue - the Communist Party pushed for a simplified system in the 1950s to reduce illiteracy while the use of traditional characters in Hong Kong is fiercely cherished as a symbol of its cultural independence from the mainland - attracted a storm of criticism as well as support.

Detractors said Wong was using it to further an anti-China agenda. One sniped: "You prefer to be a British dog rather than a Chinese man."

The attacks escalated to such an extent that Wong, an active microblog user the past three years with 3.4 million followers, shut down his account with the message on Wednesday: "Started happily but departing with disappointment."

Hong Kong celebrities generally steer clear of politics, except at major historical junctures such as the Tiananmen incident, for which a fund-raising concert was organised.

One reason, says political scientist Dixon Sing of Hong Kong University of Science and Technology, is concern that they may get shut out of China's market.

But in Hong Kong's increasingly more polarised and politicised environment, some, like Wong, have found themselves caught up in political fracas while others have become more forthright in airing their views.

One is ex-TVB actress Erica Yuen, just-elected chairman of the radical People's Power. Singer Anthony Wong Yiu Ming took part in the anti-national education and July 1 protests, while singer Deanie Ip urged the government to solve the city's housing challenges during a concert in March. Hong Kong leader Leung Chun Ying's wife was in the audience.

Analysts attribute the nascent trend to growing public discontent and what Dr Sing terms "escalating conflict between civil society and government" over worries that Hong Kong values such as freedom of speech are being undermined.

"A few celebrities, guided by their conscience, will stick their necks out."

But it is not just the pro-democracy artistes who are speaking out.

On the other side, stars such as Jackie Chan, Stephen Chow and Liza Wang were appointed delegates to the Chinese People's Political Consultative Conference, the country's top advisory body.

In 2009, Chan waded into political controversy when he said that Hong Kong and Taiwan were too chaotic and "we Chinese need to be controlled".

Sometimes, though, celebrities may not have any political agenda but people are quick to attribute motives to their words and deeds.

Take, for instance, local band Rubberband, which took part in a July 1 government-sponsored concert that critics called a ruse to distract Hong Kongers from the annual protest march.

"In one sense, the band was just taking up a job offered by a concert organiser," observes Dr Lee. "But many people looked at it as offering support for the government.

"In these situations, the celebrities do not express political views directly; but citizens articulate the political implications of their actions."

Wong himself said in an interview with Xinhua post-hullabaloo: "I am neither an academic nor an expert. What I wrote were just thoughts after some casual reading."

Ultimately, celebrities with a political cause are likely to remain a minority here.

But as Lau said then: "If I become CE and am being scolded by the people, will those who supported me still be there for me? Who doesn't want to be CE? But I am aware of the reality.

"Far better to be an ordinary citizen who is popular."