New Fast and the Furious races to meet fans' hopes 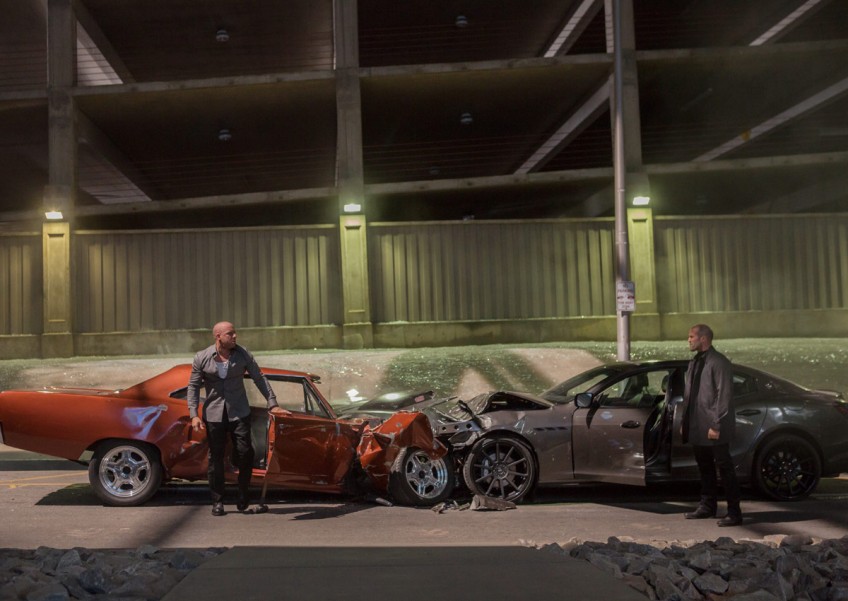 In 2015, Furious 7, the seventh instalment in the car-racing cinematic franchise The Fast and The Furious, distributed by Universal Pictures, earned more than $1.5 billion worldwide.
UIP

The next instalment of the car-racing cinematic franchise The Fast and the Furious is due soon. With a radical twist in the plot, expectations are high. Wang Kaihao reports.

In 2015, Furious 7, the seventh instalment in the car-racing cinematic franchise The Fast and The Furious, distributed by Universal Pictures, earned more than $1.5 billion worldwide, and it remains the highest-grossing Hollywood blockbuster in the Chinese mainland with 2.4 billion yuan ($350 million) revenue from the box office.

So, perhaps, the franchise's fans are wondering if the latest film can break the record?

Well, the answer is probably "yes". At least, that is the expectation.

On April 14, the saga, which has run since 2001, will hit silver screens again with The Fate of the Furious, its eighth production, being premiered simultaneously in China and the United States.

Neal H. Moritz, the producer of the franchise since the beginning, says the new film "was really challenging because the bar was set so high by seven (Furious 7)".

"The audience has huge expectations. Honestly, we feel the responsibility to give them something satisfying."

He says there was once debate on whether to end the series with Furious 7, which had a happy ending, in that the multiracial street racing elites led by Dominic Toretto (commonly known as "Dom" who is played by American actor Vin Diesel), get reunited.

For the new film, Chris Morgan, the screenplay writer of the franchise since the third instalment, The Fast and the Furious: Tokyo Drift, says he wanted something that the audience of the franchise had not experienced.

So, he came up with the idea of prolonging the story: Dom is lured into crime and turns his back on the racing family.

For Moritz, this is "like going against everything we've done in the seven films".

"What always amazes me is how we are able to develop and maintain that blurred line between good guy and bad guy over the course of this series," says Moritz.

"We've allowed each of our characters to grow in different directions.

"We've never gone into a new chapter with any preconceived notions of what they should do, and have let each movie organically grow each of the characters."

The Fate of the Furious is the start of a trilogy, which will be released within the next four years.

With this film, F. Gary Gray, the director, makes his debut in the franchise.

This action film veteran best known for his The Negotiator (1998) and The Italian Job (2003), has reasons for confidence when it comes to prolonging the popularity of the long saga.

"The pressure for me is to be creative, not in terms of money," says Gray.

"There are people who have grown up with the characters.

"They care about what will happen next. They care about the characters in a way you don't normally have for one movie. So, as long as the ideas feel true, fresh, and honest, the franchise will always have a fan base."

Indeed, this eighth edition tries to be fresh.

The Fate of the Furious is the first major Hollywood studio movie shot in Cuba in the past 50-plus years, after US-Cuban relations got unfrozen after decades of confrontation.

As Moritz sees it: "Somebody's gonna do it, and we wanted to be the first one."

The racing has also been moved onto an icy plain in the Barents Sea, joined by a submarine, and myriad remotely-controlled automobiles creating a scene of a "zombie car" attack in New York, which Gray says like "playing in a toy store".

The role of Cipher, the hi-tech savvy controlling the automobiles, is the first female villain in the franchise.

Calling herself a fan of the franchise, Theron, 42, also shares her feelings with China Daily about playing someone "powerful and rapacious".

"Hopefully, I would never become somebody like that," she says.

"I'm fascinated (about playing the villain's role) because I always wonder about why serial killers kill people and can't stop. They are people like us, but for some reason, whether it is the nurture or the environment, they do things we can't even imagine. When you play a villain, that part of the storyline is very alive."

Nevertheless, not everyone enjoys playing the villain.

After his debut in Furious 7, British actor Jason Statham joins the franchise again.

Known for his image as a masculine hero on the big screen, the 50-year-old actor does not consider his role Deckard Shaw as the baddie, though he goes against the Dom's team in the last instalment.

Academy Award-winning actress Helen Mirren is another debutante in this series.

Meanwhile, responding to Chinese netizens who joke that The Fast and The Furious may eventually have racing in outer space, Morgan says: "The films are big, but are not about superheroes. They are about real people in the real world."

Perhaps, the sense of reality partially explains the popularity of the series.

As Moritz says: "There is no Chinese actor in The Fast and The Furious, but Chinese audience relate to it because it is about family."

Moritz also says: "If you have themes that are relevant, the films can play worldwide."

So, will there be races in the streets of Chinese cities in the future? Morgan says: "The traffic (in Beijing) is amazing, just like Los Angeles."