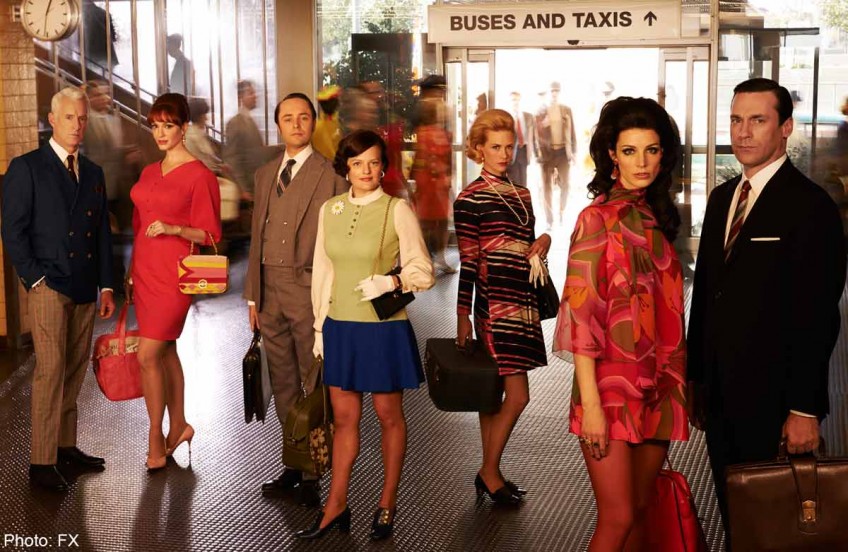 That vivid depiction of a bygone Manhattan won millions of fans around the world, dozens of accolades and turned previously under-the-radar actors into household names since its debut in 2007.

With the final seven episodes to start airing on cable network AMC on April 5, fans in the Big Apple can indulge in cut-price liquid lunches and visit a beautifully curated exhibition about the hit television series.

On Monday, AMC will unveil a "commemorative sculpture" outside the Time and Life Building, fictional home to Sterling Cooper and Partners, the advertising firm at the heart of the show.

Jon Hamm - Don Draper himself - and co-stars Elisabeth Moss, January Jones and Christina Hendricks will attend, and the statue will remain on display in the plaza through the summer, the network said.

The Museum of the Moving Image has mounted an exhibition of sets, costumes and hundreds of props, and offers a fascinating glimpse of how creator Matthew Weiner turned an idea into a series.

It opened last Friday and runs until June 14, but curator Barbara Miller said it was already "tremendously popular." The museum said the opening weekend saw nearly 2,000 visitors each day - more than double its regular attendance.

"It's bringing new audiences here that are either 'Mad Men' fans or just intrigued by hearing about it. So it's been great," said Miller.

Visitors can step into Don's office in all its 1960s glamour, and his and Betty Draper's colonial-style kitchen - so true to life that even the cheese grater appears stained by years of use.

Among more than 30 costumes on display is the black dress worn by Don's secretary-turned-new wife Megan to sing "Zou Bisou Bisou" and some of the hourglass attire that has made Hendricks an international sex symbol.

Screens broadcast clips from the series, showing the objects on display as they appeared on celluloid.

"I think that the visual style of the series is beautiful and it's very attractive to people and it's sort of like the candy that gets people involved and it's very satisfying.

"But I think all of that without the strong story structure and the compelling characters, I don't know that would have been enough to sustain a series through seven successful seasons."

Other exhibition highlights are journal entries that Weiner made in the 1990s - 15 years before the series came to television.

The "Mad Men" writers' room has also been partially reconstructed, featuring the conference table and chairs, trucked over from Los Angeles where the team met daily to prep storylines.

The attention to detail is astonishing. Weiner was so determined to immerse his characters in period detail that even drawers - not seen by the viewer - were stuffed with props.

Linda Pawlowski, an American who lives in Germany but was in New York to visit her daughter, said the design was so authentic that it reminded her of her childhood.

"My son and daughter-in-law have watched it and I think they find it fascinating because it's a period of history they don't know anything about," she told AFP.

"Now I'm more interested in watching it after seeing the exhibit." Weiner is in conversation at the museum on Friday, the first of four such public discussions with the creative director advertised in New York until late May.

To cap it all, New York is offering a Mad Men Dining Week - a send-up of the city's traditional restaurant week that offers cut-price meals at some of the city's finest establishments.

Barbetta, a high-class Italian restaurant dating back to 1906 and whose menu was featured on "Mad Men", is among those taking part.

Owner Laura Maioglio told AFP that diners can chose a two-course lunch featuring dishes Barbetta served during the 1960s, and said "very many" had already made reservations.

"It's really a giveaway for us, but we're happy to participate," she said, describing the show as "fabulous."