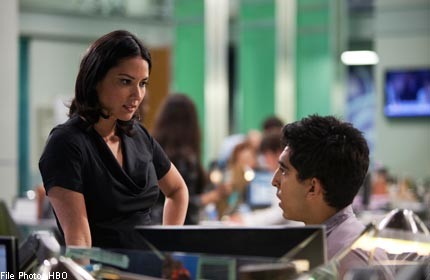 SINGAPORE - The Newsroom is cursed. It suffers from that incantation, "Oh, you have to watch this, you'd love it..." .

This usually means I stubbornly hold off before dipping into a random episode. Cue a hopeless addiction and shunning the world to devour series after series.

In theory, I should be all over The Newsroom like a virulent rash. Not so much because of creator Aaron Sorkin - I can take or leave his scripts of brainy bickering - but because it's close to my job.

But I resisted the first season and if it wasn't to review it, I would have happily missed this one too.

Not that there's nothing to attract me.

Jeff Daniels (as lead anchor Will McAvoy) is never less than awesome and the only real reason to watch the show. It also features the future Mrs Roberts aka Olivia Munn.

Do I recognise any of the situations? Yes and no.

Any time, any situation, everyone has a killer quip to hand; dripping with acid and so sharp, you'll use it with friends and claim you came up with it. So yeah. That's exactly like The New Paper on Sunday. (Editor's note: Ahem. Really?)

Everyone is intimidatingly intelligent, but this highlights a flaw in the writing. For some reason, all the women characters have one man in their lives that they get tongue-tied and awkward over.

Just the women. The guys play it cool.

It's jarring. Actresses like Munn carry it off, but it's like Sorkin added this aspect just to have "will they, won't they" situations.

As a newbie to the series, I can only take it that a lot of the characters have slept, or had some relationship, with each other.

There's a lot of those comfortably irritable "old married couple" conversations. What this show does get right is the tension of a deadline.

This season kicks off with a brilliantly directed sequence about having to cut a libellous soundbite from a filmed report.

It could have been played as mundanely as calling the reporter and getting him to re-voice the piece, live over the phone.

But here, it's a time bomb. An organisation's reputation on a knife-edge.

Sadly, there's not enough of that aspect. It rings more true than focusing on their private lives.

The worst part of the show is its veneer of smug.

This season starts in the summer of 2011. It's weird that while some events featured still feel recent - Occupy Wall Street - others, like Steve Jobs leaving Apple, seem from a generation ago.

But Sorkin uses this 20/20 hindsight to tell real news networks that this is the way they should have covered the news.

Sorry, The Daily Show does that job far better, and it's more current.

I won't be ploughing through the past season - but I'm not against catching it again, preferably on a boxset. Then I can skip that insufferably smug theme tune.