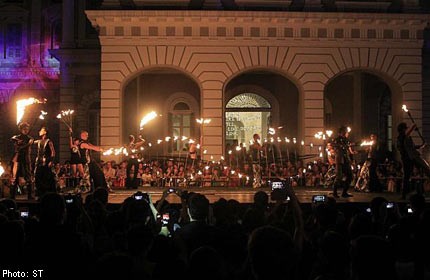 Performers from home-grown Starlight Alchemy drew the loudest gasps with Redux, a show of fire twirling and acrobatics.

SINGAPORE - Hundreds of people crowded the front of the National Museum of Singapore last night, as the Singapore Night Festival opened with dazzling displays of fire, lights and acrobatics.

Close to 80 free events, from dance performances and art installations to film screenings will be held throughout the civic district over this weekend and the next.

The event will continue on Saturday night and on Aug 30 and 31, from 7pm to 2am.

Stretching from Plaza Singapura to Raffles City and Waterloo Street to Armenian Street and Fort Canning Park, this is the largest night festival yet, and it will cost its organisers, the National Heritage Board, more than $1 million to produce.

Ms Angelita Teo, 41, festival director and director of the National Museum of Singapore, said it was hoping to draw as many people as last year, when 476,000 attended.

"It's our third Night Festival as we love to see the lights. The dance on the facade was beautiful," said Ms Lee Lin Kiak, 48, who was there with her friend, Ms Charlene Chong, 42.

But the act that drew the loudest gasps was that of home-grown Starlight Alchemy, which thrilled spectators with a mix of fire twirling and acrobatics.

Nearly 100 local artists are performing at the festival this year, more than last year. Ms Teo said this was an important barometer of the festival's success.

She said: "We want Singaporeans to take ownership of the festival this year and see how talented our local performers can be, if given the right platform and support."