No grand wedding for actress and model Sheila Sim

While soul-searching, supermodel and actress Sheila Sim accepted that love cannot be rushed, and that she needed to take her time to really understand herself before she could open her heart to another. She tells Her World Brides editor Steve Thio she was so ready for the love of a lifetime when she found him online and said "yes" after just six months.

Well, I met him through a dating app. He is a 36-year-old Singaporean who works in the finance industry. My family approves of him as do my closest friends and 118 Channel 8 series co-stars, like Chen Han Wei and Chew Chor Meng, who are like family to me, too.

How did most people react when you told them about meeting him online?

Some asked why I did that, mostly because they were concerned about the dangers of online dating. Using an online platform is no different from meeting and getting to know someone in any other social setting. In every situation, one just needs to be smart about befriending someone new.

It should be really easy for someone like you to meet people, so why go online?

It's easy to meet someone new, but it's not that easy to meet someone special. For me, meeting someone in a work-related setting, like a public event, can be an issue. This question is always in the back of my mind: Is this person's interest in me genuine or he is just attracted to my celebrity status?

It was a breeze! My friends encouraged me to do so - and I'm glad they did. Online dating is a very convenient platform for a homebody like me. Using an app allowed me to search for someone I was truly attracted to before the getting-to-know-you chat.

In fact, my fiance and I talked quite a bit online. When we came face to face for the first time, it was like meeting an old friend. Another good thing about online dating is that even if you don't find yourself a partner, you can still find a friend.

What were some of your specifications?

Erm... someone taller than me? Haha! I was also looking for someone with similar hobbies and interests - travelling, loves food, and so on. That's like half of Singapore, right?! I did come across guys who posted pictures of themselves with their fancy cars and watches, but I was looking for a humble guy who wasn't materialistic.

Thankfully, my QC (quality control) was quite accurate when it came to his profile. He turned out to be really down to earth, thoughtful and simple - all the qualities that I love most about him.

The big question: Did he know who you were?

If he did, he pretended to be very calm about it. I did ask him about it a few weeks after we'd started dating and he said, "Bonus lor, pretty girl." I think we were both just glad we looked exactly like our online pictures. That's no longer something one can always count on these days.

He proposed on New Year's Eve - just six months after your first date. Are you guys sure about each other?

With age comes wisdom. At 33, I'm glad I know what I want in my partner and in my life - and, more importantly, what I don't want. Expectations change as we journey through different stages of our lives. I used to fantasise about big, dramatic love stories. Now, I want the simpler things in life.

I am blessed to have found someone I can communicate with; someone I can trust my life and who makes me feel very secure. Also someone who assures me of his care and love without having to put it into words.

So you see a long and happy future with him?

We can never be absolutely sure of what the future holds. Right now, I do want him to be the man I'll grow old with.

I always tell people who think they're ready to get serious to take a holiday together beforehand. When you are with someone 24/7, even it's just for a few days, you get a taste of what it would be like to be with that person every day for the rest of your lives.

So how was your first holiday together?

Very challenging! Not many people would have opted for a first holiday like ours - a hiking expedition to Mount Rinjani in Indonesia. We've "conquered" Bukit Timah Hill, but neither of us had ever hiked up a mountain.

We wanted our first trip to be fun and adventurous.

A marathoner who's run in many overseas marathons, he said: "It's okay lah, just go. They always say that it's very hard, but I still survived!" And off we went.

Mount Rinjani is an active volcano 3,726m above sea level; the second tallest mountain in Indonesia. The slopes are barren with lots of loose rocks. We survived Day 1 with flying colours. Day 2, we started our climb at 2am, and it was dreadfully cold and windy. He was so apologetic because he'd underestimated how cold it could get - despite the advice from online blogs of climbers who'd done it.

So what did you discover about him during the trip?

The chemistry between two persons could make or break a potential relationship. It revealed a lot of his precious qualities. For instance, he had a bad leg cramp throughout the hike, but he never failed to put me before himself. It's a quality that is not easy to find these days. He didn't set out to impress me by doing this, but it really touched my heart. And I still come first.

So the trip sealed the deal for you?

It was a big plus, but what really sealed the deal was the fact that we both fitted so well into each other's lives, especially when it came to lifestyle, values, friends and family. I am very pro-family and, as I grew up with my grandmother, I am also pretty bound by traditions. I love that he is the same way.

How did his meeting your friends go?

They love him! He gets along easily with most people because of his genuinely sincere personality. The opinions of my family and closest friends are important to me. I made it a point for them to meet him very early on in our relationship to make sure that I wasn't blinded by love. I can only say that they were even more excited than I was when I announced his proposal (LOL).

What do you love most about him?

His lips. Hahahaha! Jokes aside, I love that he's very honest and forthcoming about his opinions. He never patronises me and I never have to second-guess his thoughts. He knows what I'm really implying and feeling when I say something - even when I express it all wrongly. His tolerance for my idiosyncrasies is remarkable. I'm blessed. Most of all, he makes me a better person.

And what can't you stand about him?

You know what they say: sometimes the thing you love most about a person can be the very same thing that irritates you. In his case, he is as sensitive about my feelings as he is about himself. But that really is such a small thing; there's lots about him that's endearing. Anyway, we still have loads to disover about each other.

Don't you find such a proposal at all unusual?

If I'd read about someone else getting engaged after just six months together, my first thought would have been that the woman must be pregnant. Well, to set the record straight, I am not pregnant. I accepted his proposal because it felt right. I know I want to commit my life to this man.

Well, to set the record straight, I am not pregnant. I accepted his proposal because it felt right.

Do you agree that the right timing matters?

Timing is everything! I've always believed that all failed relationships might have worked out if the timeline of events had been different. I also believe in destiny and I'm glad we found each other when we did.

Author Elizabeth Gilbert couldn't have put it better when she wrote this in Eat, Pray, Love: "What would I do if you never came here? But I was always coming here. 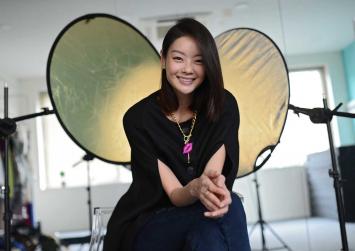 I thought about one of my favourite Sufi poems, which says that God long ago drew a circle in the sand exactly around the spot where you are standing right now. I was never not coming here. This was never not going to happen."

He must have been very enamoured to propose so soon. Is it because you are so fabulous?

So how are you preparing for your upcoming nuptials?

When I was younger, I had vivid ideas of my dream wedding - from the theme to the decor and the table setting. Now, I feel that a wedding should be unique to the both of us; it's not just about what I want.

But here's the surprise. When we started discussing it, he told me that he's never wanted a wedding! I was like,"Huh?" Even though I have no expectations anymore, I still needed something to work with, right! He later explained that it was because being in the limelight makes him feel awkward.

So, we've agreed on a small-scale, intimate wedding. I told him to see it as a day of blessings from our families and friends. And we've promised each other that it'll be a day of fond memories and fun. Actually, we're both pretty fortunate that our parents are okay with this instead of a grand celebration. We are still quite lost at where to begin with the planning and stuff, but I'm sure everything will eventually just fall right into place.