Timothee Chalamet credits staying away from "hard drugs" and superhero movies for his success.

The 25-year-old actor is trying to "figure out" being famous and navigating his career, and revealed a valuable piece of advice he received from a "hero" when he was just starting out.

"One of my heroes - I can't say who or he'd kick my a** - he put his arm around me the first night we met and gave me some advice. [What was it?] "No hard drugs and no superhero movies…

"I don't want to say some vapid, self-effacing thing. It's a combination of luck and getting good advice early in my career not to pigeonhole myself."

The Dune star tries not to worry about how he's seen by the public.

He told Time magazine: "To keep the ball rolling creatively takes a certain ignorance to the way you're consumed."

But Timothee wants to use his platform for good and raise awareness of mental health issues and climate change.

He said: "I don't think it's a coincidence that the same generation that inherits the overheated planet is the generation saying, 'Hey, there's a level of complacency here." 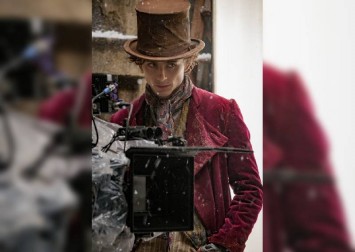 The Call Me By Your Name actor now thinks it is "insane" that he dropped out of college and recalled how hard it was trying to get his big break, remembering the "soul-crushing anxiety of feeling like I had a lot to give without any platform."

But Timothee was determined to hold out for the jobs he wanted and not take on anything with too much of a commitment, such as a lengthy TV series.

He added: "Not that those opportunities were coming at me plenty, because they weren't.

"But I had a marathon mentality, which is hard when everything is instant gratification."