Nomadland director Chloe Zhao's historic Oscars win censored in China, months after she was accused of insulting the country

News of Beijing-born filmmaker Chloé Zhao’s historic win at this year’s Oscars – she became the first Asian woman to be named best director for her road movie Nomadland, which also picked up the best picture award – has either been downplayed or censored in China.

No mainland media livestreamed the event and there was no mention of the 39-year-old’s Oscar wins from the People’s Daily and Xinhua News Agency, China’s official mouthpieces.

On social media, there was also little discussion on the subject. On Douban, the popular Chinese film review and community forum, there’s no topic dedicated to the 93rd Academy Awards. Individual bloggers on Weibo and WeChat, the two most-used social media platforms in the mainland, found their posts heavily censored.

Guda Baihua, a popular Weibo influencer with 13 million fans, who mostly translates news of US shows, commentaries and live events, sent out a video of Zhao’s acceptance speech with the vague title “A speech at an Academy Award” to evade the censors. But two hours later, his video was taken down. He later showed a screenshot of a message from Weibo saying the video “did not pass Weibo reviews”. 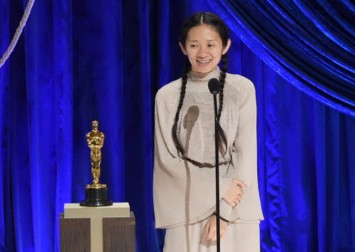 Another blogger sent out a full list of this year’s Oscar-winning movies, including Nomadland , but the post could not be viewed, shared or commented on. Searches on the Weibo platform were also censored; “#93rd Oscars” yielded an error message showing “according to relevant laws, regulations and policies, the topic is not found”.

On WeChat, one film blogger Taotao “wrote about something for a whole morning but it couldn’t get published”, hinting the topic in question was Zhao’s Nomadland . Instead, they congratulated Anthony Hopkins, who won best actor for his performance as an elderly man with dementia in The Father.

Earlier in the day, about 30 people had gathered at a small bar on The Bund in Shanghai as early as 8am local time to support Zhao and watch the awards live on YouTube. But the screening, hosted by New York University alumni, didn’t start until 10am, when organiser Kevin Ke got his VPN service to work.

“They cut the VPN,” Ke announced to the gathering. He also said his WeChat account was blocked after he wrote a post on Sunday praising Zhao.

China’s muted response to Zhao’s success is a stark contrast to the earlier reception she received in February when the now US-based filmmaker was named best director at a Golden Globe Awards. The news was celebrated in her birth country and became the most viewed topic on Weibo the following day, with high-profile Chinese celebrities posting their congratulations.

Zhang Ziyi, a Chinese actress known for her role in Crouching Tiger, Hidden Dragon, was among the first to celebrate the news, posting a message using the director’s Chinese name: “Congratulations, Zhao Ting! Look forward to the Oscars.”

Zhao’s stepmother, Song Dandan, a well-known actress in China, said: “She has become a legend in the family … and will inspire countless Chinese children.”

However, Chinese netizens soon questioned whether Zhao, who was educated in the UK and the US, could be regarded as a Chinese citizen. The public scrutiny intensified when quotes from a 2013 interview she gave to Filmmaker magazine surfaced. Zhao reportedly described China, where she spent her teenage years, as “a place where there are lies everywhere”. Some found the comment offensive and accused her of “insulting China”.

Since then, publicity about the film has been removed from social media in China and it has caused heated debate. Nationalist commentators said Zhao had betrayed her country, while others called to keep filmmaking out of politics.