Only 10 and Malaysian girl is a star 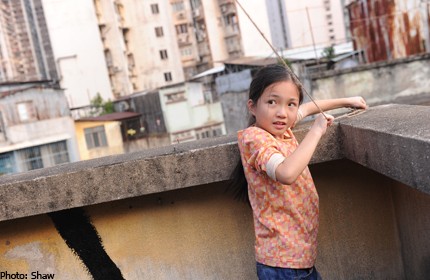 At 10 years of age, Malaysian star Crystal Lee is one over-achieving kid.

Not only has she taken on acting, hosting and singing jobs, but she's also amassed a collection of some 200 trophies for singing and good grades in school (she holds a scholarship, too).

Just two months ago, she added to her list of accolades the Best Actress award at the Shanghai International Film Festival. The youngest to win the award, she charmed the judges with her natural performance in the upcoming mixed-martial-arts movie, Unbeatable.

In a phone interview last week, the pint-sized actress, who was back in Malaysia, came across as precocious as her film's character, Liang Pei Dan, who is forced by circumstances to take care of her mentally-unstable mother.

Coy about her Shanghai win, the only child of a tuition-teacher mother and engineer father said that life back home in Selangor goes on as normal.

"Life is the same as before, I go to school and, after school, I go for singing lessons and do my homework," said Lee, who is a Year Four pupil at Sri Sempurna International School.

But "normal" is relative. She is very much a celebrity back home and people ask her for her autograph.

And it's no wonder she gets recognised everywhere she goes - she has appeared in over 50 commercials, dramas and movies. Recently, she showed off her vocals in Hunan TV's children's singing contest, Let's Sing Kids.

It seems like all that time spent with showbiz veterans has rubbed off on her. During the interview, the articulate girl readily answered questions fielded frequently by the media in a diplomatic and mature manner.

When My Paper asked her to pick a favourite among the actors she has worked with, she said: "I like them all, because they were all nice and friendly. They looked out for me and were very professional."

She also couldn't name an idol she admired or an actor she hoped to work with in the future, explaining that she liked all the actors she's watched in dramas and films, and that she would be happy to work with anyone.

How politically correct is this child?

Lee might be young, but her path to stardom has been seven years in the making.

Her first hosting stint was at her kindergarten graduation ceremony, when she was three.

"My kindergarten principal was the one who discovered me and asked me to be the emcee," she said, adding that she wasn't nervous at all to be on stage then.

Word got around about her talent and a slew of acting jobs came knocking - the first of which was a joint Malaysian-Singapore drama production called Lion Hearts in 2009.

While all eyes are set on Lee's blossoming showbiz career, the little girl has back-up plans too.

She said: "I wouldn't mind being a singer, actor or a vet. I love small animals. I have 10 dogs, about 40 fishes, a tortoise and five rabbits."

How's that for an over-achiever?