Pain in the buff 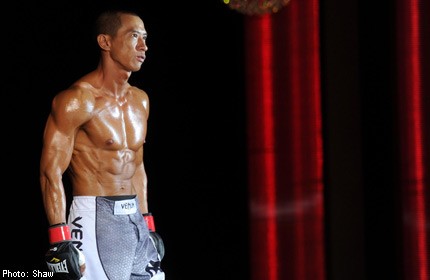 After pictures appeared in Hong Kong of actor Nick Cheung in his new movie Unbeatable, looking better than Italian renaissance sculptures of heroic men, people said men no longer have excuses not to get into similar shape.

The 45-year-old had never had such a superb physique and if he could achieve it in middle age, then so could other men - thus went the talk around town.

But he says his is not an example that is easy to follow.

"People see my body in the movie and think that it's quite easy to achieve, that anyone can get it if you just push yourself a bit.

"But they must be joking because it was actually very, very difficult to train myself to look like this. I want to tell them, maybe you should go and train yourself and show me if you can also achieve this."

Cheung, who stars in Unbeatable as a former boxing champion down on his luck, is not boasting; he is sharing his pain. He calls his training routine in preparation for the movie "suffering".

For nine months, he worked out at the gym for at least three hours every day without fail.

"I could not stop and take a break even for one day. If I did that, I might not have been able to get back into the programme again.

When I woke up in the morning, I sometimes felt like my muscles were about to explode," says Cheung, who was a cop for four years before he turned to acting.

Then, there was the extreme diet plan. Every morning, he gulped 30 egg whites, then ate either boiled chicken or steamed fish later in the day.

"There's no seasoning or oil in any of the food, so after a while, I really couldn't even get myself to chew on them anymore. I had to dump the chicken in a blender and take it as a drink."

Since filming for Unbeatable ended, he has returned to his old self.

"I went back to my normal life, I don't have a six pack anymore. I don't even like the buff look very much. When you're too buff and broad, you won't look good in a suit," he says with a laugh.

Speaking to Life! over the telephone, he adds in a mix of Mandarin and Cantonese that he will not be hitting the gym again any time soon, not even if he was forced to.

"I'd rather die than go through all that suffering at the gym all over again."

Did his wife, 49-year-old actress Esther Kwan, feel disappointed when he lost his rock-hard bod?

"No, she doesn't really care about how I look," he says, laughing. "Anyway, she saw me from the beginning of my training to the end, so she saw the gradual changes over the months and never thought much of them. So her reaction was nothing compared with all of you."

Unbeatable was not the first movie he had to suffer physically for. He had to starve himself to attain a gaunt look to play a murder suspect in last year's acclaimed movie Nightfall.

"The food I ate for Unbeatable is not meant to be consumed by humans, but at least I still ate something. I starved for Nightfall." His determination to push himself so hard physically for his roles is clear testament to his dedication to his craft.

Although he was well aware of the amount of training his role in Unbeatable would require, he had no qualms taking it on. "The only time I am ever concerned or scared about anything is when I'm still deciding whether I should accept a role or not. But as soon as I accept the role, I give it my all because there's really nothing to be scared of anymore.

"If I'm still all worried and anxious after I accept a part, then how could I ever perform to my full potential? I liked this script and I liked the role, so I had to push myself in whatever way I needed to make this character convincing."

This meant working beyond the pain barrier after he broke his little finger on his left hand.

"There was still a bit of filming to do, so I had some morphine and kept on filming. The worst thing was, I still had many fight scenes. So I was punching sandbags, punching people or getting punched by others, all in pain. It was really tough, but I'm an actor and this is my job."

In June, he won Best Actor for the role at the Shanghai International Film Festival.

He says cheerily: "I've been hearing good things from a lot of people about the movie and about my performance, so all the pain and hard work were worth it.

"I had surgery on my little finger last month, but I still cannot bend it completely. The doctors say that a full recovery is very unlikely, but it's all right. This finger will also remind me of a lot of good memories associated with the movie." Unbeatable is Cheung's fourth film collaboration with acclaimed action director Dante Lam, 48.

Two of their previous works - The Beast Stalker (2008) and The Stool Pigeon (2010) - also earned the actor a string of accolades, including Golden Horse Best Actor for the former and Best Actor nomination at the Hong Kong Film Awards for the latter.

"I work really well with director Lam. The more I work with him, the more I find that we are in sync in the way we think. We have a special chemistry that I don't have with other directors. I know what he is looking for in the roles, and he always gives me the opportunity to push myself further," he says.

Another film-maker Cheung is "grateful" to have worked with many times is prolific director Johnnie To, 58.

It was only following the actor's gritty turn in a number of To's films over the past decade, including Breaking News (2004), Election (2005) and Exiled (2006), that he finally broke into the A-list.

Before that, he had been regarded only as a reliable character actor. Relegated for years to supporting roles or goofy comedic parts in films such as Wong Jing comedies The Conman (1999) and The Tricky Master (2000), he finally managed to break the mould with To's films and is now regarded as someone with serious acting chops.

Says the actor, who debuted in the 1989 cop movie Thank You, Sir: "Not everyone is a hunk, but my journey in the industry is proof that not being a heart-throb doesn't mean I'm useless."

Despite the long slog to stardom, he says he never felt like quitting.

"I'm grateful that I love my job so much. I love being an actor and I enjoy the acting process very much. I have never calculated how big or small my parts are in the scripts that I get, because I just want to focus on doing my part well."

Because he treats acting as a job, and not as a platform for fame, he also keeps his personal life separate from his work.

The actor, who has a seven-year-old daughter with Kwan, has never had so much as a whiff of scandal to his name in the rabid Hong Kong mediascape.

"I managed to keep a low profile because I'm not the type of actor who goes around hanging out with young women just because I want my name in the news.

"I'm also not the type to go around volunteering personal information about myself. If I am the type of actor who tells everyone that I live in a big house, or drive a big car, then how can anyone believe my performance in more gritty films? I think actors should give the public more room for imagination so that viewers won't harbour prejudices before watching a show.