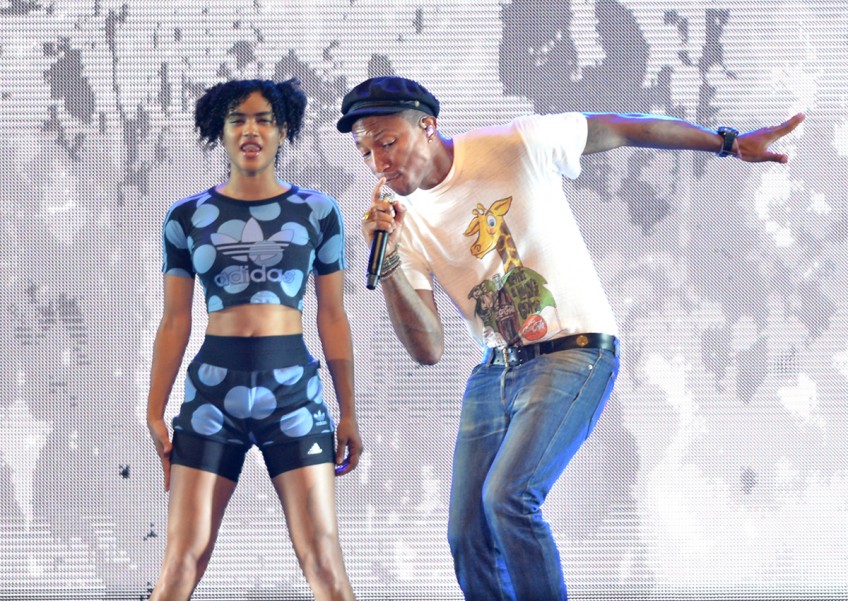 Six years was too long a wait for US singer-producer Pharrell Williams' return to our shores.

He was last here in 2009 with his American funk/hip-hop group N.E.R.D., performing at the F1 Rocks Singapore With LG and Mosaic Music Festival.

The 42-year-old Grammy-winning artist proved that the wait was worth it last Friday when he performed a solo set at the 2015 Formula 1 Singapore Airlines Singapore Grand Prix, dishing out both new and classic hits for 50,000 fans.

We look at some of the highlights from his electrifying show.

A Pharrell Williams gig is a spellbinding, multi-genre tribute to himself.

Last Friday, fans who thought of him as just "that guy" behind Happy, Blurred Lines and Get Lucky got an introductory course to his achievements as a solo artist and producer.

Not only did he perform songs from his second solo album Girl, like Marilyn Monroe, Happy and Come Get It Bae, he also treated N.E.R.D. fans to old gems like Lapdance, Rock Star, Spaz and She Wants To Move.

The hits he co-wrote or produced also got some of the biggest cheers. These included Gwen Stefani's Hollaback Girl, Nelly's Hot In Herre, Kendrick Lamar's Alright, Daft Punk's Get Lucky and Snoop Dogg's Drop It Like It's Hot.

It's no wonder he has earned himself 10 Grammy Awards in his lifetime - seven in the last two years alone.

During the show, it was often hard to tear our eyes off Williams' troop of beautiful and talented dancers and back-up singers.

No one was complaining when The Baes, which stands for Best Attitude Ever and is an affectionate name for the wolf pack, had time to shine in the spotlight and show off their best moves.

Describing them as "unapologetic for their talents and with great minds, dreams, ambitions and best attitudes ever", Williams introduced each member of the team, but not before stumbling over the name of the newest of the lot, Jaylene Mendoza.

To teasing jeers from the audience, a collected Williams said: "Let me explain to you. Jaylene is the newest member of the team and I didn't want to mess up her name."

What we would have given to be among the fans on stage dancing with Williams during his set.

The men yelled enthusiastically or mumbled uncertainly to N.E.R.D.'s Spaz and Rock Star.

The women pulled out their slinkiest moves for She Wants To Move, also by N.E.R.D.

And later, the children clapped along to infectious hit Happy, a song from the soundtrack of animated comedy Despicable Me 2 (2013).

This article was first published on September 21, 2015.
Get The New Paper for more stories.