MANILA, Philippines - Christmas came early to the Philippines as Catriona Gray bested 93 other aspirants for the 2018 Miss Universe crown in ceremonies staged at the Impact Arena in Bangkok, Thailand, Monday morning to becoming the fourth Filipino woman to win the crown.

She received her crown from last year's winner Demi-Leigh Nel-Peters of South Africa.

The representatives from Vietnam and Puerto Rico, both strong and popular contenders, cracked the Top 5.

The 94-candidate haul this year is the biggest in the pageant's 66-year-history.

During the final round of questioning, the final three were asked about the most important lesson they learned in their lives.

Gray shared her experience working in the slums of Tondo, Manila, and looking at the "silver lining" through the smiles of the children there.

She hopes to inspire a feeling of being grateful "where negativity will not foster, and the children will have smiles."

This year, the global tilt had its first all-female panel of judges.

They were joined by former Miss Universe winners Porntip Nakhirunkanok of Thailand (who now goes by the name Bui Simon) and Michelle McLean of Namibia who won her crown in Bangkok in 1992. 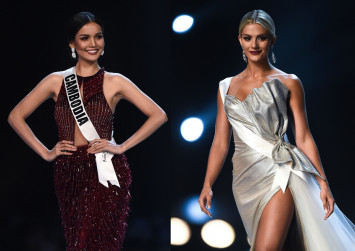 As in the previous year, the Miss Universe pageant selected semifinalists based on geographical regions. Five delegates were chosen each from the Americas, Europe, and Africa and Asia-Pacific. Five more "wildcard" aspirants were included, regardless of the continent from where their countries are located.

The pageant also paid tribute to Spain's Angela Ponce for breaking barriers by being the first transgender woman to reach its global stage.

"I don't need to win Miss Universe, I just need to be here," Ponce said in Spanish in a pre-taped segment shown live during the telecast. She received a standing ovation from the judges and the audience.